I discovered an Outlook 2010 annoyance over this long weekend. A user I’m in touch with uses Outlook 2007 as a simple CRM system. He creates tasks that are linked to contacts, using the Contacts button at the bottom of the New Task window, things like “Call John” with some notes. If he then looks at the Outlook contact record for John, he clicks the Activities tab and sees all the tasks linked to that contact listed.

Trouble is, he upgraded to Outlook 2010 recently and the feature no longer works. The Contacts button is not in the New Task window by default, but you can get it back by selecting Show contacts linked to the current item in File – Options – Contacts. Even if you do though, the Activities list in a Contact window is broken and the tasks do not appear.

It turns out that this is a bug, possibly caught in the crossfire as Microsoft develops the Outlook Social Connector, which has its own Activities record.

Bugs are unsurprising in a product as complex and multi-faceted as Outlook; but Microsoft could do much better in its communication. This thread on “Microsoft Answers” lacks any official response; we do not even know if it is fixed in the Office 2010 SP1, now in private beta, or whether the feature has been removed and it is just the user interface that needs cleaning up.

While it is unimportant to most of us, clearly if you do use Outlook as a simple CRM system it is crucial. In fact, I recall when contact linking was introduced in Outlook it was touted as a major new feature.

Some users have resorted to re-installing Outlook 2007, which turns out to be rather awkward thanks to the interdependence between Outlook and Word, though it can be made to work.

Incidentally, I was interested to note that Microsoft performed a u-turn with regard to the availability of Business Contact Manager (BCM), an Outlook add-in and companion product. This used to be installed by default with Office Small Business edition, and was something that I used to uncheck or uninstall as I never used it and it could cause problems. Nevertheless, some people did use it, and were upset to find it missing from Outlook 2010 Home and Business. The updated Business Contact Manager was only available by download if you had a volume license for Office.

This was a silly decision, since Business Contact Manager targets very small businesses (including one-person businesses) who are least likely to have a volume license. Microsoft therefore changed its mind:

After careful consideration, we decided to simplify the Office 2010 lineup by including Outlook with BCM, a business product, only in volume licensing. We understand it is not ideal for every user. When we made this decision, we underestimated the importance of BCM to our small business customers and those who purchased previous versions of Office in retail stores or pre-installed on PCs. Worse yet, we left many of our customers, who didn’t want to buy through volume licensing, stranded with their data locked in previous versions of Office.

I’ve been trying Office 2010. I use Outlook with Exchange 2007 and was interested to see how it compares to Outlook 2007.

In terms of things I care about, not much has changed. That said, it took me a long time to wrest good performance out of Outlook 2007 – which is why this blog is a top Google hit on “slow outlook 2007” – whereas the speed of Outlook 2010 seems fine right out of the box. I haven’t tried all the permutations though: cached and non-cached, 32 or 64 bit, and so on, so consider this only a preliminary impression.

One of the reasons is that the Outlook team has abandoned integration with Windows Desktop Search for online mailboxes:

The Search Toolbar add-in setup code is removed in Outlook 2010. The Search Toolbar add-in enables local indexing of online mode Exchange Server mailbox stores by using Windows Desktop Search. As a result of this change, e-mail in online Exchange mailboxes will not appear in the results of Windows Explorer searches. The online indexing add-in is a legacy component that adversely affects performance of Outlook during startup and shutdown. With this removed in Outlook 2010, users will experience improved Outlook reliability and significantly lower Exchange bandwidth usage. For fast search, use Cached Exchange Mode or for online mode, use Exchange Search in Exchange 2007 and later versions.

So what else is new? You can see a technical summary here. Outlook has now had the full Ribbon treatment, which I suppose is good for consistency, though plenty of annoyances remain. For example, let’s say you’re trying to figure out whether an email is genuine or not. I had one that gave me pause for thought, supposedly from Amazon.com. The first thing I check is the message header – no, not the thing Outlook still calls the “message header”, which adds a couple of fields to the top bar. What I need to see is the email header, showing the origin of the message and its path across the Internet. I clicked around hopefully. Eventually I found it – you have to click the down arrow at bottom right of the Tags (huh?) section of the ribbon:

This opens what Outlook calls Properties, including the “Internet headers” which are what I want to see. The message was spam, by the way – it came from a domain that has nothing to do with Amazon: 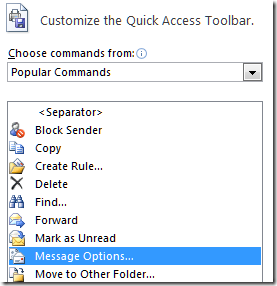 I am so used to this sort of thing with Outlook that I expect it; Outlook 2010 is no worse than its predecessor.

[Update: Ed Bott points out in the comments that you can also get to the Properties dialog through the File tab.]

Other new features include Quick Step macros – could be handy though I can’t think of a reason I will use it; connection to multiple Exchange accounts which will be excellent for those who need it, especially if you can use cached mode with all of them (I’ve not checked); and a bunch of stuff that only lights up if you have Exchange Server 2010, such as (at last) server-based archiving – no more archive.pst files littered around every machine you ever use.

I do want to mention one persistent disappointment though. Conversation view. Why can’t Outlook behave like a discussion forum, where each thread is grouped? In theory it can: just switch on Conversation View. In practice it is useless, because instead of using the In-Reply-To field that identifies a message which is a reply to another message, Outlook 2010 uses the subject line.

The subject line is hopeless as a means of defining conversations. Worse, it’s dangerous. Let’s say you’ve got an unimportant “conversation” with the subject “June 20th” – it’s about a meeting you don’t need to attend. Then you get an email also entitled “June 20th” from someone else; this one is critically important. By grouping it into the existing “conversation”, Outlook disguises its importance.

I recall being told at Microsoft’s PDC last November that the Outlook team was aware of this problem in the preview and it would be fixed somehow. However, when I switched Conversation View on briefly in Outlook 2010 RTM I saw exactly the same problem. I suppose there is a chance that upgrading to Exchange 2010 magically fixes it; this on the to-do list for me. For now, the solution is not to use Conversation View at all.