There are many intriguing debates within the world of audio, and one which has long interested me concerns DSD (Direct Stream Digital). This is an alternative technology for converting and recovering sound from digital storage. The more common PCM (Pulse Code Modulation) works by sampling sound at very short intervals and recording its volume. By contrast DSD records the difference between one sample and the next, sampling at an even greater frequency to compensate for the fact that it only captures a single bit of data in each sample (ie on or off). For example the standard used by CD is:

and by SACD (a DSD format):

The SACD was introduced by Philips and Sony in 1999 as an upgrade to CD, since it is a higher resolution format cable of a dynamic range of 120 dB and frequency response up to 100 kHz. It was an effort, like the PCM-based DVD Audio, to convince the public that the CD is not good enough for the best quality sound.

SACD was largely unsuccessful, mainly because there was not really any dissatisfaction with CD quality among the general public, and even some experts argue that CD quality already exceeds what is required to be good enough for human hearing.

That said, SACD was popular in the niche audiophile community , more so than DVD Audio. Some listeners feel that SACD and DSD results in a more natural sound, and believe that PCM has some inherent harshness, even at higher-than-CD resolution. Enthusiasts say that DSD stands for “Doesn’t sound digital”. For this reason, there is a regular stream of new SACD releases even today, and DSD downloads are also available from sites like Native DSD Music and Blue Coast Records. Some DSD downloads are at higher resolution than SACD – Double-rate or Quad-Rate.

The resurgence of DSD has been accompanied by increasing availability of DSD DACs (Digital to Analogue Converters). While these tend to be more expensive than PCM-only DACs, prices have come down and a quick eBay search will find one from under £100.

There are several complications in the DSD vs PCM debate. While DSD is a reasonable format for storing digital audio, it is poor for processing audio, so many SACDs or DSD downloads have been converted to and from PCM at some point in their production history. If PCM really introduces harshness, it is presumably too late by the time it gets to DSD. That said, it is possible to find some examples that are captured straight to DSD; this can work well for live recording.

Another complication is that some consumer audio equipment converts DSD to PCM internally, to enable features like bass management.

Is there any value in pure DSD? I wanted to try it, preferably with DSD files rather than simply with SACD, since this is much easier for experimenting with different formats and conversions as well as enabling Double DSD and higher. Unfortunately SACD is rather hard to rip, though there is a way if you have the right early model of Sony PlayStation 3.

The first step was to get a DSD-capable DAC. I picked the Teac 301 which is a high quality design at a reasonable price. But how to get DSD to the DAC? Most DSD DACs support a feature called DSD over PCM (DoP), which conveys the DSD signal in a PCM-format wrapper. DoP is not a conversion to and from PCM, it merely looks like PCM for better compatibility with existing playback software.

Next, I used a Raspberry Pi 2 supplied by Element14 (cost around £25.00) and installed Volumio, a pre-built version of Linux which includes an audio streamer and web-based user interface. You download Volumio as a single file which you burn onto a micro SD card using a utility such as Win32DiskImager. Then you plug the card into the Pi, connect to a home network via Ethernet and to a DAC via USB, and power on.

After a minute or two I could connect to Volumio using a web browser. 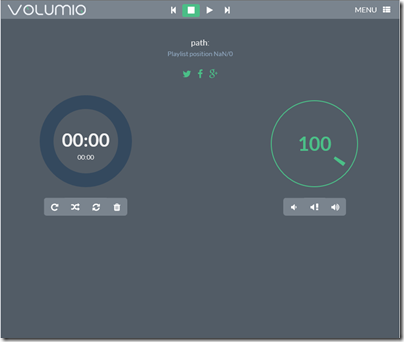 My music is stored mostly in FLAC format but with a few DSD files in Sony’s DSF (Digital Storage Facility) format, and located on a Synology NAS (Network Attached Storage). In Volumio’s menu I went to Library and mounted the network share containing the media. Next, I tried to play some music. PCM worked, but not DSD. I changed the playback settings to enable DoP: 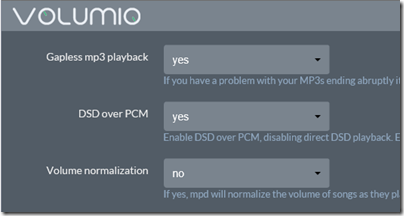 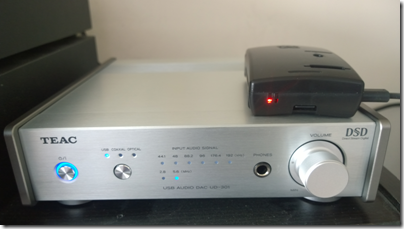 If you squint at this image you will see that the 5.6 MHz light is illuminated, indicating that the DAC is processing Double DSD.

It sounds lovely, but is it any better than the more convenient PCM format? I am sceptical, but intend to try some experiments, using a forthcoming audio show to find some willing listeners.

That aside, I am impressed with the capability of the Raspberry Pi for enabling a simple and cost-effective means of playing DSD over the network, although with the assistance of an external DAC. It plays PCM formats too of course, and with Volumio is easily controlled using a mobile device, thanks to the touch-friendly web UI.