I spent yesterday in the dim light of a Manchester cinema, attending the Windows Phone 7 developer day.

The event was organised by DeveloperDeveloperDeveloper, which is a .NET community group run, as far as I can tell, by a group of Microsoft MVPs. The sponsors were Microsoft, Appa Mundi, and NxtGenUG. Towards the end of the day, Andy Wigley (from Appa Mundi) made a statement that this was a community event and not an official Microsoft event. It was true up to a point, though as far as I can tell Microsoft paid for most of it -“Microsoft UK very kindly provided the venue and logistic support.” says the event description. Microsoft was present showing real Windows Phone 7 devices, and the presenters included Andy Wigley (from Appa Mundi) and Rob Miles, who have also presented the official Jump Start training for Windows Phone 7, and regular TechEd speaker Maarten Struys who is a Windows embedded and Windows Phone evangelist working for Alten PTS in the Netherlands. Community, or Microsoft PR?

Regardless, they were excellent speakers and well informed on all things Windows Phone 7. The community aspect did come to the fore when it came to the catering – there was none – and the venue itself which felt as you would expect a cinema out of hours to feel. I’m guessing Microsoft the community was disappointed with the attendance, around 100 in a venue that seats 330. 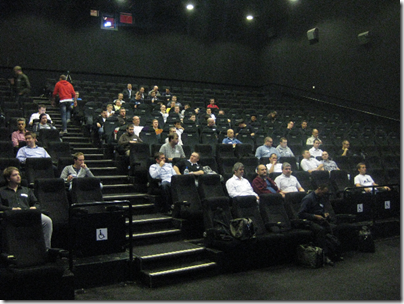 There is one significant benefit to presenting in a cinema. The screen and projection was first-rate. 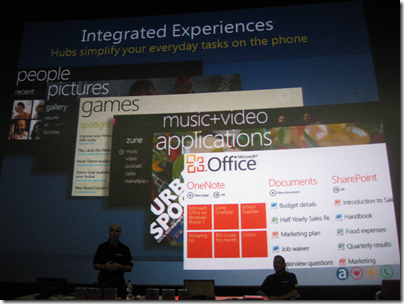 The sessions themselves were introductory but struck me as useful for anyone getting started with Windows Phone 7 development – which given the devices are not yet available, is probably most of us. Andrej Radinger’s session on creating apps that work offline was particularly interesting to me. I had previously seen the Jump Start course so some of the material was already familiar, though the refresher did no harm.

Much of the challenge of Windows Phone 7 development is coping with the fact that your app will frequently get killed and have to resume later as if nothing happened. We got a lot of input on this topic.

Another challenge is coping with Expression Blend. Designer Tricky Bassett gave a short but insightful view of the design process for a Windows Phone 7 app, with some intriguing asides along the way. He is a design professional, and said that his team had been excited about SketchFlow, the prototyping tool in Blend, but in practice found it little use because they only need sketches, rather then the working controls which SketchFlow gives you. He also commented on Blend, saying that Blend with Windows Phone 7 projects was more stable than it had been before, in his experience with other projects. In previous work with Blend, solutions that did not load have been a recurring problem – I take it that either they loaded in Visual Studio but not in Blend, or vice versa.

Bassett also said that Blend takes some effort to learn, and this was confirmed by the way some of the presenters struggled to do basic operations with the tool. The Blend UI is perplexing and at events like this one I’d suggest that a Blend Basics piece would go down well.

The Silverlight and XNA platforms strike me as pretty good, though I think that lack of native code development will be a problem among the best developers – there are interesting rumours about certain developers getting special privileges. 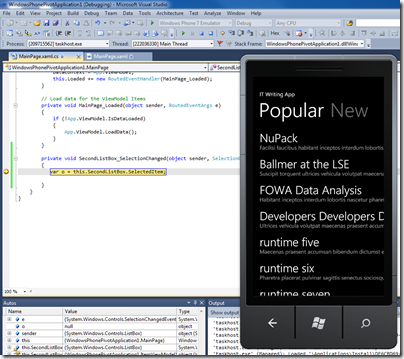 My overriding impression though is that the phone is good, the tools are good, but the demand is lacking. One developer told me that he has been trying to sell an idea for a custom Windows Mobile application to a small business client with 12 employees. They are keen but their employees want either Apple iPhone or Google Android phones. Windows Phone 7 may help by being a better and more attractive device, but getting past the perception that Windows phones are not much good is going to be a problem.

But what can Microsoft do? It is going to take devices that deliver on the promise, a stunning marketing campaign, and aggressive pricing, for this thing to flourish.

The big story is about compatibility:

To deliver what developers expect in the developer platform we’ve had to change how phone apps were written. One result of this is previous Windows mobile applications will not run on Windows Phone 7 Series.

This puts Microsoft in an awkward position. Support for custom business apps has been one of the better aspects of Windows Mobile. What Microsoft should do is to have some way of continuing to run those old apps on the new devices. Instead, Kindel adds:

To be clear, we will continue to work with our partners to deliver new devices based on Windows Mobile 6.5 and will support those products for many years to come, so it’s not as though one line ends as soon as the other begins.

I would not take much account of this. No doubt there will some devices, but demand for Windows Mobile will dive through the floor (if it has not already) once Phone 7 is available, making it an unattractive proposition for hardware partners.

The danger for Microsoft is that after this let-down, those with existing Windows Mobile apps that are now forced to choose a new development platform might choose one from a competitor.

The mitigation is that apps which use the Compact Framework will likely be easier to port to Windows Phone 7, because the language is the same. Native code apps are a different matter. Of course it will be technically possible to write native code apps for Windows Phone 7, but probably locked down and restricted to special cases, such as perhaps the Adobe Flash runtime (I am speculating here).

PS – I see that developer Thomas Amberg has articulated exactly these concerns in a comment to Kindel’s post:

Platform continuity was the single most important feature of Windows Mobile. Being able to run code from 2003 on a current phone is more important to our customers than a fancy UI (which Microsoft seems not able to get right anyway). Further, the ability to access hardware specific APIs through P/Invoke has been vital in many of our projects (e.g. to use Bluetooth in the early days). Those advantages have now gone. You just rendered useless years of development work and many thousands of lines of code.

"we will continue to work with our partners to deliver new devices based on Windows Mobile 6.5 and will support those products for many years to come"

You will, I bet. But which device manufacturer will produce such "dead-end" devices?

Time to switch to another mobile OS.

News about the Windows Phone 7 development platform is leaking out, ahead of its official unveiling at the Mix conference next month. Rumour has it that both Silverlight and the XNA gaming framework will be supported, for creating consumer-focused applications, together with limited access to native APIs subject to Microsoft’s specific approval.

The controversial aspect, if these ideas prove to be accurate, is lack of compatibility with existing applications. It seems possible that C++ applications written for previous versions of Windows Mobile will not run, while those written for the Compact Framework will need porting to the Silverlight UI.

While there is little love for Windows Mobile, it is used for business applications where it integrates well with the rest of Microsoft’s platform. Since Windows Phone 7 seems to target the consumer, Microsoft may argue that this does not matter, since businesses can continue to use Windows Mobile. You would imagine, though, that enthusiasm for continuing with Windows Mobile will be limited given the superior usability of Windows Phone 7. Maybe a professional edition to follow in 2011?

One thing we know for sure is that Adobe Flash is not supported in the first release, though Microsoft says it is not opposed to it appearing on the platform in future. That in itself is interesting, since Adobe is hardly likely or able to rewrite Flash in Silverlight or XNA. Will certain important developers have privileged access to a wider range of native APIs? Despite rumours, there is still plenty to speculate about.