Microsoft’s Erik Schweibert, principal engineer in the Apple Productivity Experiences group, says that with the release of Office 2016 version 16 for the Mac, the productivity suite is now “for the first time in 20 years, built out of one codebase for all platforms (Windows, Mac, iOS, Android).” 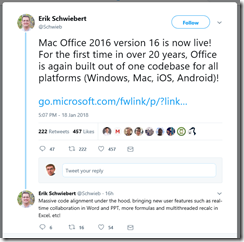 This is not the first time I have heard of substantial code-sharing between the various versions of Office, but this claim goes beyond that. Of course there is still platform-specific code and it is worth reading the Twitter thread for a more background.

“The shared code is all C++. Each platform has native code interfacing with the OS (ie, Objective C for Mac and iOS, Java for Android, C/C++ for Windows, etc),” says Schweibert.

Does this mean that there is exact feature parity? No. The mobile versions remain cut-down, and some features remain platform-specific. “We’re not trying to provide uniform “lowest common denominator” support across all platforms so there will always be disparate feature gaps,” he says.

Even the online version of Office shares much of the code. “Web components share some code (backend server is shared C++ compiled code, front end is HTML and script)”, Schweibert says.

There is more news on what is new in Office for the Mac here. The big feature is real-time collaborative editing in Word, Excel and PowerPoint.

What about 20 years ago? Schweibert is thinking about Word 6 for the Mac in 1994, a terrible release about which you can read more here:

Mac Word 6.0 was a crappy product.  And, we spent some time trying to figure out how not to do that again.  In the process, we learned a few things, not the least of which was the meaning of the term “Mac-like.”

Word 6.0 for the Mac was poor for all sorts of reasons, as explained by Rick Schaut in the post above. The performance was poor, and the look and feel was too much like the Windows version – because it was the Windows code, recompiled. “Dialog boxes had "OK" and "Cancel" exactly reversed compared to the way they were in virtually every other Mac application — because that was the convention under Windows,” says one comment.

This is not the case today. Thanks to its lack of a mobile platform, Microsoft has a strong incentive to create excellent cross-platform applications.

There is more about the new cross-platform engineering effort in the video below.