According to Jerry Huang of Gladinet, whose Cloud Desktop exposes a variety of cloud storage services as mapped drives in Windows Explorer, Google storage is “about 10 times cheaper” than Windows Azure. Since Amazon S3 has similar prices to Azure, I imagine Google undercuts that by some margin as well.

Gladinet compares Google and Azure using some other criteria as well. On speed, it gave the edge to Azure but observed that it might just depend which data center was nearest. On SLA, the two seem similar.  On API, it says Azure is easier if you use Visual Studio, but not if you work with “PHP, Ruby or anything other than .NET”.

In another post, Huang has a nice summary of accessing Azure storage from C#.

It’s worth noting that Microsoft Skydrive offers a relatively generous 25GB of storage for free, but there is no way to extend this limit.  There is also no official Skydrive API, though one has been hacked unofficially. Gladinet supports Skydrive too, using either this or the unofficial WebDAV support.

I am a fan of Gladinet. There is a free starter edition, or paid-for with extra features. 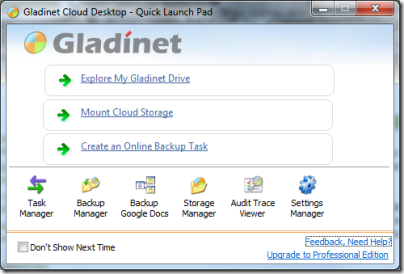