I’ve upgraded my laptop to Ubuntu Lucid Lynx, and I’m using it to type this post. Ubuntu Lucid Lynx is a “long term support” edition,  making it suitable for businesses. The upgrade from Karmic, the previous version, went relatively smoothly. I say relatively because my laptop is dual boot and has two hard drives. For some reason Grub, the Ubuntu boot utility, always detects the partitioning incorrectly, so when I first start up after an upgrade it cannot find the drive. I have to hit “e” for edit, correct the reference to the boot partition, and then fix Grub’s menu.lst once I am back in.

That aside, all went well, Compiz didn’t break and I still have wobbly windows – a fun graphic effect that I have only seen on Linux.

I would recommend Ubuntu to anyone, provided that they can cope with occasional forays into menu.lst and the like. I cannot think of everyday tasks which are not easily accomplished on Ubuntu. Performance is excellent, and it feels a little faster than Windows 7 on this oldish Toshiba laptop. Considering the cost, it is a fantastic bargain for both home and business users. No Windows tax, no Apple tax, no Microsoft Office tax.

There are a couple of other issues though that continue to hold it back. One is what I can best describe as lack of polish. Part of the reason is that less money is spent on design; Linux looks less home-made that it once did, but put Ubuntu’s new Music Store (an extension to Rhythmbox) alongside Apple’s iTunes and the difference is obvious. Personally I prefer Rhythmbox, but for looks there is no contest. 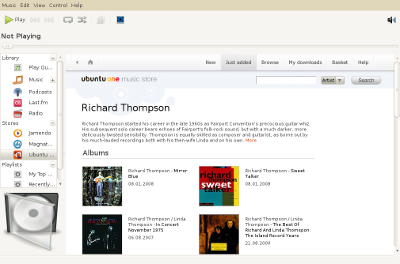 Another problem is application availability. Many major Window applications such Microsoft Office can be made to work on Ubuntu via the Wine non-emulator, but it is not ideal. It’s certainly a problem for the work I do. I’m about to spend some time with Adobe’s Creative Suite, for example, which I could not do in Ubuntu.

One thing that will help drive Ubuntu and Linux adoption on the desktop is cloud computing. I have a separate blog post coming on this; but Microsoft’s new Office Web Apps could help considerably in mixed Linux/Windows networks. Specifically, I noticed that a Word Open XML document (.docx) which lost its formatting in Open Office, the suite supplied with Ubuntu, worked fine in Word Web App accessed with Firefox. Cloud and web-based computing goes a long way towards solving the application problem.

I like Ubuntu very much, but I don’t expect it to dent Windows or Mac sales any time soon.

26 thoughts on “Ubuntu Lucid Lynx great as ever, no game changer”