It is day two of Mobile World Congress here in Barcelona; and everyone is pondering the implications of Nokia’s Windows Phone partnership with Microsoft. It is a pivotal moment for the industry, but not necessarily in the sense that the two partners hope.

Let me state the obvious for a moment. This is not good for Nokia, though it might be “the least bad of all the poor choices facing Nokia”, as Mikael Hed of Rovio (Angry Birds) put it yesterday. Nokia has huge market share, but it was already falling sharply, as these figures from late last year illustrate. Nokia’s total market share declined from 36.7% in Q3 2009 to 28.2% in Q3 2010; and its Smartphone (Symbian) share from 44.6% to 36.6%. These are still big numbers, but will inevitably decline further.

Following last week’s announcement, though, Nokia will transition from a company which formerly commanded its own destiny with Symbian, to one that is an OEM for Microsoft. The savings will be substantial, as CEO Stephen Elop noted at the press event here on Sunday evening, but it is a lesser role.

Why has Nokia turned to Microsoft? It is not a matter of Microsoft planting its own man in Nokia in a desperate effort to win market share. On Sunday Elop said he was no trojan horse, and also laid to rest rumours that he is conflicted thanks to a large Microsoft shareholding; he is selling as fast as the law allows, he said, and his shareholding was nowhere close to what was alleged in any case.

Rather, the Nokia board brought Elop in specifically to make tough decisions and likely form an alliance with either Google or Microsoft. I am not sure that former Nokia exec Tomi Ahonen is the best source of commentary – he is unremittingly negative about the alliance – but I like his piece on the choices facing the board last year, when it must have decided that MeeGo, the mobile Linux co-sponsored by Intel, could not deliver what was needed.

Elop chose Microsoft, his argument being that the choice was between Android and Windows, and that going Android would have created a duopoly that was good for Google but bad for the industry. By going Windows Phone “we have created a three horse race,” he said.

It is a fair point as far as it goes – though maybe he takes too little account of RIM, especially in the enterprise market – but whether Nokia can really break that duopoly is an open question. It is not a question of how the duopoly can be avoided: it already exists. 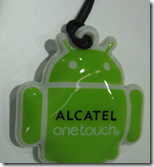 Given the absence of Apple, this Mobile World Congress could almost be called the Android World Congress, such is the dominance of Google’s mobile OS. It works, it is well-known, it is freely customisable by manufacturers and operators. Android is not perfect, but it is a de facto standard which nicely meets the needs of the non-Apple mobile industry.

This morning three significant far Eastern manufacturers announced new Android devices; none announced Windows Phone devices. The three are HTC, Alcatel Onetouch (which claims to be the fastest-growing handset provider in the world), and Huawei. At the Alcatel Onetouch press conference I asked CEO George Guo why his company was focused on Android:

Why Android? Android is a phenomena. It is what every operator wants and also what the consumer is looking for. The iPhone is great but just has one type, and also it is highly priced. People want something different so are looking for variety. Android-based phones provide that opportunity. With Android phones you can range from $100 up to several hundred. Also we can make customisations based on the Android system. We can fit different kinds of customers’ needs. That’s why, from the whole ecosystem point of view, because recently (laughs) people talk about this a lot, we think that Android does provide quite an ecosystem.

Note how Guo (unprompted) makes reference both to the other member of the duopoly, Apple, and the new pretender, Microsoft/Nokia.

However good their products, rivals such as RIM with its new QNX-based OS and HP with WebOS will struggle to compete for developer and public attention.

Does Windows Phone have better chances? If Nokia could easily translate its Symbian sales last year to Windows Phone sales next year, then sure, but that would take a miracle that beleaguered Nokia is unlikely to deliver. Windows Phone 7, launched last year, demonstrates that despite its desktop dominance Microsoft cannot easily win mobile market share, and that partners such as HTC, Samsung and LG are focused elsewhere. Nokia’s commitment will greatly boost Microsoft’s market share in mobile, but to what percentage is frankly hard to guess.

There are a couple of other unanswered questions. One is about differentiation. In order to compete with Apple, Microsoft has made a point of locking down the Windows Phone 7 specification, despite its multiple manufacturers, requiring Qualcomm Snapdragon for the chipset, specific hardware features, and a relatively unmolested GUI. If Microsoft continues along these lines, it will be hard for Nokia to be truly distinctive. On the other hand, if it abandons them, then it risks spoiling the consistency of the platform.

Another big question relates to tablets. Microsoft has no announced tablet strategy, except insofar as it is not using the Windows Phone 7 OS for tablets and has hinted that the next full version of Windows  will be tablet-optimized. By contrast, both Apple and Google support both smartphones and tablets with a single OS; indeed, it is hard to define the difference between a small tablet and a smartphone. Here at Mobile World Congress, Viewsonic told me that a 4” screen defines it: less than that, it’s a smartphone; more than that, it’s a tablet.

What are Nokia’s tablet plans? Will it change Microsoft’s mind, or wait for Windows 8 following meekly in Redmond’s footsteps, or do something with MeeGo?

Elop has also in my view made a mistake in shattering Nokia’s Qt-based developer community. Qt was the unifying platform between Symbian and MeeGo, and could have been the same for Windows Phone 7. Why? Here’s what Elop told us on Sunday:

I respect Elop; but I think he has been sold a line here. Developers are not easily confused – how patronising – and Windows Phone already has a native code SDK, available to operators and manufacturers. Many of Microsoft’s own applications for the phone are native rather than Silverlight or XNA. In principle, there is no reason why consumers would be able to tell the difference. I think Microsoft is protecting its own development stack and sacrificing Nokia’s developer community in the process.

On a more positive note, I do not forget that Elop is a software guy. I think he recognises that unless you are Apple, hardware commoditisation is inevitable whatever OS you choose. Asked about Windows Phone, the Huawei exec at this morning’s briefing said his company would consider it when the next version comes out. What he means is: if the demand is there, they will make it. If they make it, then Nokia is competing with the same economies of scale and labour that apply to Android.

Elop sees an answer in apps, ads and services: the ecosystem about which he constantly reminds us. On Sunday he noted that the partnership with Microsoft includes an advertising platform, and that this is potentially a significant source of future revenue. The new Nokia may be a lesser company than the old, but one that is better able to survive the challenge of making money from handsets.

One thought on “Nokia’s Elop fears mobile duopoly, but it is already here”