I interviewed Corporate VP of Microsoft’s developer division Soma Somasegar at the Visual Studio 2012 launch last week; see the article on the Register here. I asked about the inconsistency of the Microsoft platform, and the way the platform story has changed over the years (Win32, .NET, WPF, Silverlight and now Windows Runtime). Can developers trust in the longevity of today’s platform, especially on the client?

Here is what I thought was interesting about his reply:

Any technology you see shipping as part of Windows 8, we are very committed to that.

So what ships in Windows 8? Well, for reasons which are hard to discern for those of us outside Microsoft, Silverlight is not shipped in Windows 8. It is an optional download. In fact, the only plug-in installed by default is Adobe Flash: 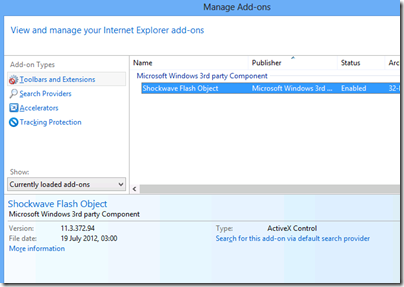 No, that does not imply that Microsoft is committed to Flash; but it does suggest lack of commitment to Silverlight, which we knew.

What you do get though is .NET Framework 4.5. This is baked in and cannot be removed as far as I can tell, though you can add and remove some advanced features.

This means you also have Windows Presentation Foundation (WPF); and in fact Somasegar specifically refers to this alongside Win32 and the new Windows Runtime.

The inclusion of technology in a current Microsoft product has implications for its support lifecycle. The ancient Visual Basic runtime, for example, is still assured of a long life since it is part of Office 2013.

My guess is that Microsoft’s thinking goes something like this. Right now, as the October launch date of Windows 8 approaches, what Microsoft needs most urgently is a viable ecosystem for its new Windows Runtime environment. This, you will notice, is the focus of the forthcoming BUILD conference as so far announced.

What, though, of the Windows desktop, has Microsoft abandoned it as legacy? My guess is that we will get deliberately mixed messaging on the subject. On the one hand, Microsoft has relegated the desktop to a single tile in the new Start screen. On the other hand, most of us will spend most of our time in the desktop, not least developers who need it to run Visual Studio. If Microsoft succeeds in establishing the new Windows Runtime platform, it would not surprise me to see a little more love given to the desktop in, say, Windows 9.

Microsoft’s platform story is messy, without question, and especially so in mobile. We have seen Windows Mobile replaced by the incompatible Windows Phone 7, and now those loyal developers who invested in the Silverlight/XNA Windows Phone 7 technologies are finding that it is all change again in Windows Phone 8 and Windows 8 (though the exact details await the release of the Windows Phone SDK).

It seems clear though that the company’s current intent is that Windows Runtime evolves as the primary client platform for both phone and tablet, while desktop remains for legacy support and for applications that do not fit the new model, such as Visual Studio and (for the time being) Office.

What if Microsoft fails to establish the Windows Runtime as a popular app platform? All I can add is that I know of no Plan B.

4 thoughts on “Platform churn? If it is in Windows 8, we are committed to it says Microsoft”