Observers have tended to focus on Windows “Blue” and what is happening with Microsoft’s core client operating system, but what caught my eye was a few figures on progress in other areas.

A notable feature of these figures is that they are relative, not absolute. Office 365 is a relatively new product, and Windows Azure (from what I can tell, since Microsoft did not release numbers) performed rather badly until its renaissance in early 2011 under Satya Nadella, Scott Guthrie and others – see here for more about this). It is easy to post big multiples if you are starting from a small base.

This is real progress though and my guess is that growth will continue to be strong. I base this not on Microsoft’s PR statements, but on my opinion of Office 365 and Windows Azure, both of which make a lot of sense for Microsoft-platforms organisations migrating to the cloud.

Why the growth in Server 2012 Datacenter? This one is easy. Datacenter comes with unlimited licenses for Windows Server running in Hyper-V virtual machines on that server, so it is the best value if you want to the freedom to run a lot of VMs, especially if some of those VMs are lightly used and you can afford to overcommit the processors (you need a new license for every two physical processors you install).

Here’s another figure that Shaw puts out:

Windows Phone has reached 10 percent market share in a number of countries, and according to IDC’s latest report, has shipped more than Blackberry in 26 markets and more than iPhone in seven.

Spin, of course. This February report from IDC gives Windows Phone just a 2.6% market share in the 4th quarter of 2012. Still, it did grow by 150% year on year, thanks no doubt to Nokia’s entry into the market.

My personal view is that Windows Phone will also continue to grow. I base this on several things:

The context of the above is not so good for Microsoft. It is coming from behind in both cloud and mobile and the interesting question would what kind of market share it is likely to have in a few years time: bigger than today, perhaps, but still small relative to Amazon in cloud and Apple and Android in mobile.

There is also the Windows 8 problem. Many prefer Windows 7, and those who use Windows 8, use it like Windows 7, mostly ignoring the tablet features and new Windows Runtime personality.

How will Microsoft fix that? Along with leaked builds of Windows Blue, Microsoft has announced the next Build conference, which will be in San Francisco June 26-28, 2013 (I am glad this will not be on the Microsoft campus again, since this venue has not worked well). There is a lot to do. 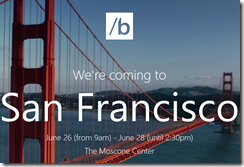