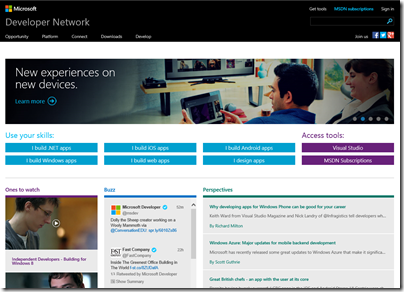 Developers are not convinced that it is an improvement. The comments to Harry’s post are pretty damning, in fact. The core complaint is that the new MSDN home page is not a developer site, but a marketing site. Click on those “Use your skills” buttons and you get not technical references, but marketing pitches. They are misleading too. Click on “I build web apps” and you get a pitch for Windows Store apps build with HTML and JavaScript – and no mention of ASP.NET or Windows Azure. 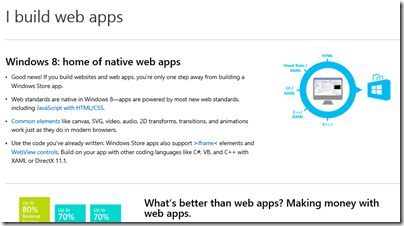 What do developers want? Here’s a good suggestion:

Why don’t you have your team work on changes to MSDN that people would actually want? Like editable blog comments with formatting and code snippet options? Or Connect/UserVoice sites that aren’t horrific and disjointed? Or adding the TypeScript blog to the Dev Tools blog feed (something I’ve mentioned a half dozen times already to various people at MS, you’d think this 5 second update might make it into someone’s queue after TypeScript being out for almost a year now)?

I just cannot fathom how you guys are so adamant that listening to developers is important to you when 99% of feedback is ignored in lieu of changes that no one asked for and no one wants.

Most people come to MSDN in search of technical information. I suspect the strong marketing pitch for Windows Store apps will be counter-productive.

On the other hand, present developers with a fast, coherent, logically organised technical resource so that you can easily find both the API reference for the platform you are targeting, and comments and help with using it, and this will attract them and make them want to use the platform more often.

5 thoughts on “Microsoft’s MSDN changes: too much marketing”