This will be unnecessary for Azure experts, but I have seen some misunderstanding on this point, hence this post.

A “web site” is a unit of service on the Azure cloud platform which represents a web application hosted on IIS, Microsoft’s web server (but see below). You write a standard ASP.NET application and deploy it. Azure takes care of configuring the host VM, the server operating system, and IIS.

Using a web site is preferable to creating your own VM and installing IIS on it, for several reasons. One is that you do not have to worry about patching and maintaining the operating system. Another is that web sites can be scaled, manually or automatically, with an option for scheduling so that you can scale down the site for periods of low demand. 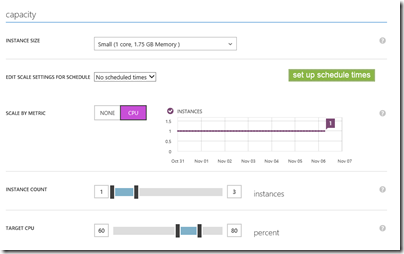 The main reason for using a VM rather than a web site is if the app has dependencies that fall outside what a web site can handle.

Another thing to know about Azure web sites is that they have four “plan modes,” but only two are worth considering for production. The Free and Shared modes host your application on a shared VM, and quotas are applied. If Azure decides your site is out of quota, it will stop responding. Fine for a prototype, but not something you want customers or users to see. This feature is not shown clearly on the table of features but it is in note 2:

The Basic tier on the other hand is decent. It is a dedicated VM, and you can scale it (manually) to 3 instances. It costs around 25% less than a Standard tier site.

It is a significant cost, but what may not be obvious is that you can deploy multiple applications to a single web site, which makes my statement above, “A ‘web site’ is a unit of service on the Azure cloud platform which represents a web application hosted on IIS”, not quite correct.

When you create a new web site, if you have one already, you can choose a “web hosting plan”. Here is an example:

In this case, there are two pre-existing web site VMs, one in East Asia and one in Europe. If you choose one of these two, the new web site will be added to that VM. If you choose “Create new web hosting plan”, you will create a new dedicated instance (or free, or Shared). Adding to an existing VM means no extra cost.

If you are a developer, it may well be better to run a single Basic VM for prototyping, and add multiple sites, rather than risking a free or shared instance which might be out of quota when you demonstrate it to your customer.

What is the limit to the number of web sites you can add? There is none, other than the overloading the VM and getting unresponsive applications.

Postscript: the Web Site service is interesting as an example which blurs the boundaries between IaaS (Infrastructure as a service) and PaaS (Platform as a service). It is more PaaS than IaaS, in that you do not have to worry about maintaining the OS, but more IaaS than PaaS, in that you are still having to think about individual VMs. It would be more purist if Microsoft abstracted away the VMs and simply guaranteed a certain level of service, or scaled up automatically and billed for what you use. On the other hand, the Web Site concept puts a lot of control in the hands of the developer/admin and help them to make best use of the resources, while still removing most of the maintenance burden. I think it is a good compromise.