Microsoft has announced the ability to compile Windows 10 apps written in Java or C++ for Android, or in Objective C for iOS, at its Build developer conference here in San Francisco. 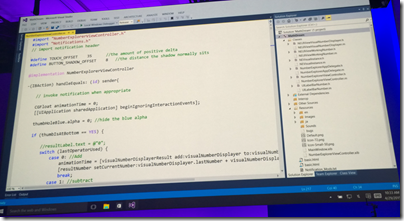 The Android compatibility had been widely rumoured, but the Objective C support not so much.

This is big news, but oddly the Build attendees were more excited by the HoloLens section of the keynote (3D virtual reality) than by the iOS/Android compatibility. That is partly because this is the wrong crown; these are the Windows faithful who would rather code in C#.

Another factor is that those who want Microsoft’s platform to succeed will have mixed feelings. Is the company now removing any incentive to code dedicated Windows apps that will make the most of the platform?

Details of the new capabilities are scant though we will no doubt get more details as the event progresses. A few observations though.

Microsoft is trying to fix the “app gap”, the fact that both Windows Store and Windows Phone Store (which are merging) have a poor selection of apps compared to iOS or Android. Worse, many simply ignore the platforms as too small to bother with. Lack of apps make the platforms less attractive so the situation does not improve.

The goal then is to make it easier for developers to port their code, and also perhaps to raise the quality of Windows mobile apps by enabling code sharing with the more important platforms.

There are apparently ways to add Windows-specific features if you want your ported app to work properly with the platform.

Will it work? The Amazon Fire and the Blackberry 10 precedents are not encouraging. Both platforms make it easy to port Android apps (Amazon Fire is actually a version of Android), yet the apps available in the respective app stores are still far short of what you can get for Google Android.

The reasons are various, but I would guess part of the problem is that ease of porting code does not make an unimportant platform important. Another factor is that supporting an additional platform never comes for free; there is admin and support to consider.

The strategy could help though, if Microsoft through other means makes the platform an attractive target. The primary way to do this of course is to have lots of users. VP Terry Myerson told us that Microsoft is aiming for 1 billion devices running Windows 10 within 2-3 years. If it gets there, the platform will form a strong app market and that in turn will attract developers, some of whom will be glad to be able to port their existing code.

The announcement though is not transformative on its own. Microsoft still has to drive lots of Windows 10 upgrades and sell more phones.