Xamarin Forms is a key framework for C# and .NET developers since it lets you target Android, iOS and to some extent Windows (UWP and therefore Windows 10 only) with maximum code reuse. I have a longstanding interest in embedded web browser controls and was glad to see that Xamarin Forms supports a capable WebView control. The WebView wraps Chrome on Android, Safari on iOS, and Edge on UWP.

I did a quick hands-on. In this example (running in the Android emulator on Hyper-V, of course), the HTML is generated programmatically and the CSS loaded from local storage. I also added some script to show the User Agent string that identifies the browser. 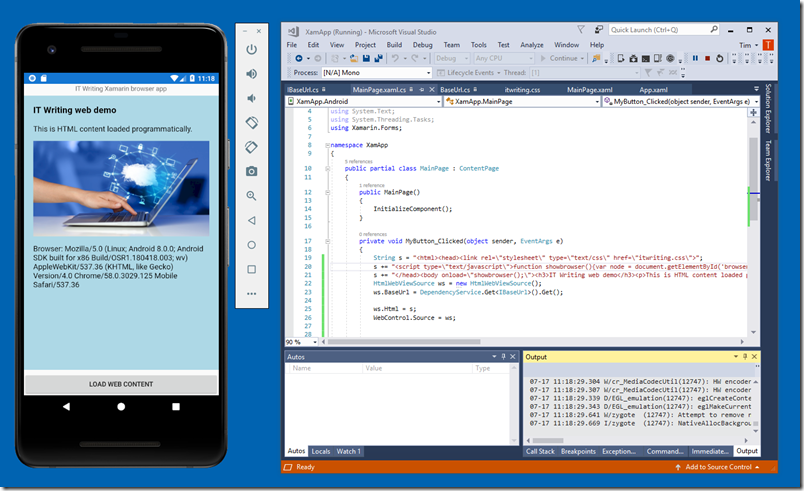 There are a few things needed to make this work. Some XAML to put the WebView on a page. Then to load content into the WebView you need an HTMLWebViewSource object. If you are loading external files, you must set the BaseUrl property of this object as well as the HTML itself. The BaseUrl tells the control where to look for files that have a relative address. This varies according to the target platform, so you use the Xamarin Forms Dependency Service to set it correctly for each platform.

In Visual Studio, you place the files you want to load in the appropriate folder for each platform. For Android, this is the Assets folder.

That is about all there is to it. As you can see from the above screenshot, I wrote very little code.

The WebView control can also display PDF documents. Finally, there is an EvaluateJavaScriptAsync method that lets you call JavaScript in a WebView and read the results from C#.

This JavaScript bridge is a workaround for the most obvious missing feature, that you cannot directly read the HTML content from the WebView. If this is a full programmatic solution and you generate all the HTML yourself, you can add JavaScript to do what you want. If the user is allowed to navigate anywhere on the web, you cannot easily grab the HTML; but this could be a good thing, in case the user entered a password or is viewing confidential data. You can grab the destination URL from the Navigating event and read it separately if necessary. But the intent of the control is to let you create rich applications that take advantage of the browser’s ability to render content, not to invade a user’s privacy by tracking their web browsing.

“It’s like a Microsoft developer event back when they were good,” one exhibitor here at Xamarin Evolve in Atlanta told me, and I do see what he means. There is plenty of buzz, since Xamarin is just three years old as a company and growing fast; there is the sense of an emerging technology, and that developers are actually enjoying their exploration of what they can do on today’s mobile devices.

Microsoft is an engineering-led company and was more so in its early days. The same is true of Xamarin. It also also still small enough that everyone is approachable, including co-founders Miguel de Icaza and Nat Friedman. The session on what’s new in Xamarin.Mac and Xamarin.iOS was presented by de Icaza, and it is obvious that he is still hands-on with the technology and knows it inside out. Developers warm to this because they feel that the company will be responsive to their needs. 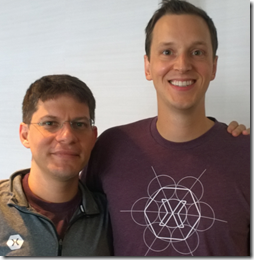 Approachability is important, because this is a company that is delivering code at breakneck speed and bugs or known issues are not uncommon. A typical conversation with an attendee here goes like this:

“How do you find the tools?” “Oh, we like them, they are working well for us. Well, we did find some bugs, but we talked to Xamarin about them and they were fixed quickly.”

Xamarin’s tools let you write C# code and compile it for iOS, Android and Mac. If you are building for Windows Phone or Windows, you will probably use Microsoft’s tools and share non-visual C# code, though the recently introduced Xamarin Forms, a cross-platform XML language for defining a user interface, builds for Windows Phone as well as iOS and Android.

The relationship with Microsoft runs deep. The main appeal of the tools is to Microsoft platform developers who either want to use their existing C# (or now F#) skills to respond to the inevitable demand for iOS and Android clients, or to port existing C# code, or to make use of existing C# libraries to integrate with Windows applications on the server.

That said, Xamarin is beginning to appeal to developers from outside the Microsoft ecosystem and I was told that there is now demand for Xamarin to run introductory C# classes. Key to its appeal is that you get deep native integration on each platform. The word “native” is abused by cross-platform tool vendors, all of whom claim to have it. In Xamarin’s case what it means is that the user interface is rendered using native controls on each platform. There are also extensive language bindings so that, for example, you can call the iOS API seamlessly from C# code. Of course this code is not cross-platform, so developers need to work out how to structure their solutions to isolate the platform-specific code so that the app builds correctly for each target. The developers of Wordament, a casual game which started out as a Windows Phone app, gave a nice session on this here at Evolve.

Wordament has an interesting history. It started out using Silverlight for Windows Phone and Google App Engine on the server. Following outages with Google App Engine, the server parts were moved to Azure. Then for Windows 8 the team ported the app to HTML and JavaScript. Then they did a port to Objective C for iOS and Java for Android. Then they found that managing all these codebases made it near-impossible to add features. Wordament is a network game where you compete simultaneously with players on all platforms, so all versions need to keep tightly in step. So they ported to Xamarin and now it is C# on all platforms..

I digress. The attendees here are mostly from a Microsoft platform background, and they like the fact that Xamarin works with Visual Studio. This also means that there are plenty of Microsoft partner companies here, such as the component vendors DevExpress, Syncfusion, Infragistics and ComponentOne. It is curious: according to one of the component companies I spoke to, Microsoft platform developers get the value of this approach where others do not. They have had only limited success with products for native iOS or Android development, but now that Xamarin Forms has come along, interest is high.

Another Microsoft connection is Charles Petzold – yes, the guy who wrote Programming Windows – who is here presenting on Xamarin Forms and signing preview copies of his book on the subject. Petzold now works for Xamarin; I interviewed him here and hope to post this soon. Microsoft itself is here as well; it is the biggest sponsor and promoting Microsoft Azure along with Visual Studio.

Xamarin is not Microsoft though, and that is also important. IBM is also a big sponsor, and announced a partnership with Xamarin, offering libraries and IDE add-ins to integrate with its Worklight mobile-oriented middleware. Amazon is here, promoting both its app platform and its cloud services. Google is a sponsor though not all that visible here; Peter Friese from the company gave a session on using Google Play Services, and Jon Skeet also from Google presented a session, but it was pure C# and not Google-specific. Salesforce is a sponsor because it wants developers to hook into its cloud services no matter what tool they use; so too is Dropbox. 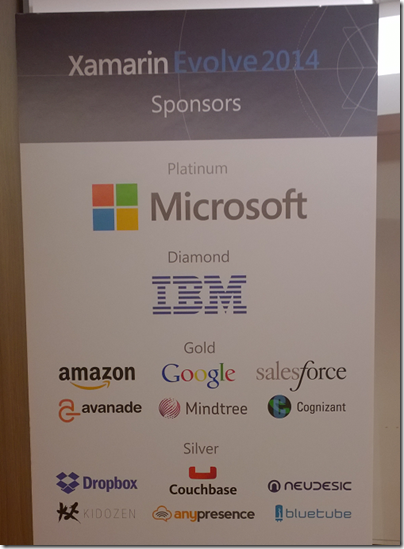 Most of the Xamarin folk use Macs, and either use Xamarin Studio (a customised version of the open source MonoDevelop IDE), or Visual Studio running in a virtual machine (given that the team mostly use Macs, this seems to me the preferred platform for Xamarin development, though Visual Studio is a more advanced IDE so you will probably end up dipping in and out of Windows/Mac however you approach it).

Xamarin announced several new products here at Evolve; I gave a quick summary in a Register post. To be specific:

Of these, Sketches is the most interesting. You write snippets of code and the tool not only executes it but does magic like generating a graph from sequences of data. You can use it for UI code too, trying out different fonts, colours and shapes until you get something you like. It is great fun and would be good for teaching as well; maybe Xamarin could do a version for education at a modest price (or free)? 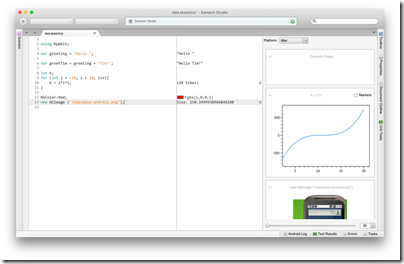 I am looking forward to trying out Sketches though I have heard grumbles about the preview being hard to get working so it may have to wait until next week. 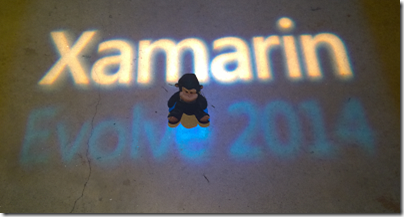