I meet some of the ThoughtWorks team at developer conferences from time to time, and generally find them smart and though-provoking to talk to. They must be the despair of the big enterprise software vendors, with a liking for open source and an aversion to heavyweight high-maintenance systems.

This remark particularly caught my eye:

Simple architectures—Simple continues to gain traction, including both techniques for building and composing applications, as well as infrastructure-based techniques to enable simple deployment, failover and recovery. This theme is a recurring one for us, but we have not yet seen the usage shifts we believe are necessary.

I asked consultant James Lewis and practice lead Sam Newman to expand on that. Why do we continue to choose complexity over simplicity?

“A lot of people like to stay inside their big box, and don’t understand the complexities that then creates,” said Newman. “There’s a lack of critical thought given to how services talk to each other. A lot of them are driven by whatever the vendor says you do. Java makes RMI very easy. [Microsoft] .NET makes binding to WSDL [SOAP] schemas very easy. All these tools make bad things very easy to do.

“When you start talking to organisations about smaller services that are focused on doing one thing well, they have the horror associated with now having more than one box to manage and operate. So it’s hard to talk about moving from one big monolithic complicated box that is hard to change, to lots of little boxes, without also having conversations with those clients about how they get better at managing multiple services.

“Netflix has 300 services. Each service runs on at least six machines. They are very good at deploying those services. Yet they are not an overly complicated domain compared to some of our clients.”

“Amazon were talking about this in 2004,” adds Lewis, “the idea that you join up development of these small, simple applications with the operational control, so the same people who build them are also the people who run them. Now that we’re seeing both private and public clouds, and the ability to spin up machines becoming more and more prevalent, its starting to become more attractive.”

This is a consistent theme from ThoughtWorks. Break up complex solutions into many small services, think about how they talk to each other (with REST and HTTP favoured), and think about the infrastructure and how to automate it as well as the software itself.

“It’s almost like we’re now able to fulfil the promise of service orientation,” says Lewis. “It needed these additional practices, around things like automated deployment, automated rollback, and an understanding that people and process are tied intrinsically with it.”

Another issue, claims Lewis, is that software architects simply get out of touch with best practice.

“Most architects who build big systems are quite a long way from their codebases. They sit in rooms talking to other architects. They might have last written a line of code five or ten years ago. What they do is to design systems as they would have done ten years ago. People do get divorced from the latest trends and perpetuate less effective ways of doing things.”

Finally, here’s something for the Microsoft platform people who read this site. ThoughtWorks is not altogether averse to Microsoft and mentions the Azure cloud platform as something which is becoming interesting. But Windows Phone:

Despite a promising start to Windows Phone, a well thought-out user interface, and probably the best development experience of any mobile platform, we have seen several stumbles in the execution of the platform strategy by Microsoft and its partners. This makes us less optimistic about the future of the platform than we were in the last radar.

Translation: nice mobile platform, but nobody’s buying it. Then again, on Monday next week Windows Phone 8 will be properly unveiled. Still hope?

I have been trying out JetBrains AppCode, a new IDE for Apple’s Objective C. The company is best known for its IntelliJ IDE for Java, and AppCode essentially takes the same core IDE and reworks it for Objective C. AppCode is itself a Java application, but unless you have a religious objection to this I doubt you will find it a problem: I found it perfectly snappy and responsive on my machine, a 2.3 Ghz Core i5 with 8GB RAM.

Installation was a snap, as Mac users expect. 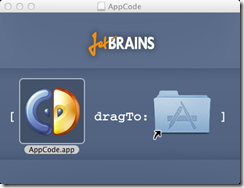 One thing I discovered immediately is that AppCode is not a replacement for Xcode, the official Apple IDE. The Apple SDKs are delivered with Xcode, and AppCode requires it. An AppCode project is also an Xcode project. 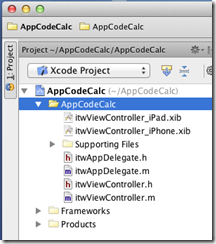 This is particularly important if you want to use Interface Builder, the Xcode visual designer, since AppCode has no equivalent. Double-click the .xib file and it opens in Xcode. This is a disorientating at first, but in practice I found it convenient to be able to switch between the two IDEs.

So why bother with AppCode, when Xcode is free? It is certainly not essential, but my view is that tools which save time or improve quality are worth the investment. Whether AppCode will do this for you will depend on how you work and whether you have any frustrations with Xcode, which improved considerably in version 4. Out of the box, Xcode has integrated Git or Subversion source code control, unit test integration, refactoring including Rename, Extract, and Encapsulate, the aforementioned Interface Builder, and a ton of other features. Sticking with Xcode is a safe choice.

That said, AppCode feels leaner and less cluttered than Xcode. It also has many additional productivity features in the editor. JetBrains’ IDEs are well known for refactoring, and while AppCode is not as rich as IntelliJ IDEA in this respect, it does have a more than Xcode.

Another strong feature is code generation. Press Command + n in the editor, and a context-sensitive Generate menu offers various time-saving options. I like the way I can type a new method in an implementation file, press Alt + Enter, and select Declare method in the interface to add it automatically to the interface file; or type it first in the interface and have it implemented automatically. It pays to learn the keyboard shortcuts

Live templates let you type an abbreviation and expand it to a block of code, which you then tab through to edit. Type for, select the template, press tab, and AppCode will create a for loop; press tab again to edit the variable name and the number of iterations. You can customise and create your own Live templates in the AppCode Preferences dialog. 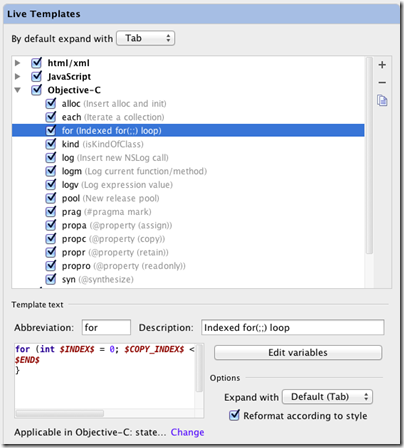 There are also a ton of performance tools in AppCode [update: note these are links to Xcode tools].  Choose Profile from the Run menu and choose what you want to analyse:

then run your app 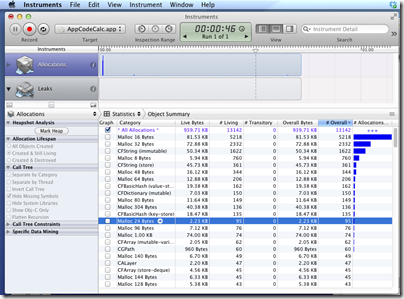 You can also do static analysis according to customisable rules.

There is a debugger which works as you would expect including stack trace and variable inspection.

The best thing I can say about AppCode is that it is a pleasure to use. It does not throw up unnecessary dialogs, it works logically, and the tools are easy to use and configure. I have not always found this to be the case with Xcode, and if you spend a significant amount of your time on Objective C development then I recommend grabbing the trial download to discover if it will speed your work.