I meet some of the ThoughtWorks team at developer conferences from time to time, and generally find them smart and though-provoking to talk to. They must be the despair of the big enterprise software vendors, with a liking for open source and an aversion to heavyweight high-maintenance systems.

This remark particularly caught my eye:

Simple architectures—Simple continues to gain traction, including both techniques for building and composing applications, as well as infrastructure-based techniques to enable simple deployment, failover and recovery. This theme is a recurring one for us, but we have not yet seen the usage shifts we believe are necessary.

I asked consultant James Lewis and practice lead Sam Newman to expand on that. Why do we continue to choose complexity over simplicity?

“A lot of people like to stay inside their big box, and don’t understand the complexities that then creates,” said Newman. “There’s a lack of critical thought given to how services talk to each other. A lot of them are driven by whatever the vendor says you do. Java makes RMI very easy. [Microsoft] .NET makes binding to WSDL [SOAP] schemas very easy. All these tools make bad things very easy to do.

“When you start talking to organisations about smaller services that are focused on doing one thing well, they have the horror associated with now having more than one box to manage and operate. So it’s hard to talk about moving from one big monolithic complicated box that is hard to change, to lots of little boxes, without also having conversations with those clients about how they get better at managing multiple services.

“Netflix has 300 services. Each service runs on at least six machines. They are very good at deploying those services. Yet they are not an overly complicated domain compared to some of our clients.”

“Amazon were talking about this in 2004,” adds Lewis, “the idea that you join up development of these small, simple applications with the operational control, so the same people who build them are also the people who run them. Now that we’re seeing both private and public clouds, and the ability to spin up machines becoming more and more prevalent, its starting to become more attractive.”

This is a consistent theme from ThoughtWorks. Break up complex solutions into many small services, think about how they talk to each other (with REST and HTTP favoured), and think about the infrastructure and how to automate it as well as the software itself.

“It’s almost like we’re now able to fulfil the promise of service orientation,” says Lewis. “It needed these additional practices, around things like automated deployment, automated rollback, and an understanding that people and process are tied intrinsically with it.”

Another issue, claims Lewis, is that software architects simply get out of touch with best practice.

“Most architects who build big systems are quite a long way from their codebases. They sit in rooms talking to other architects. They might have last written a line of code five or ten years ago. What they do is to design systems as they would have done ten years ago. People do get divorced from the latest trends and perpetuate less effective ways of doing things.”

Finally, here’s something for the Microsoft platform people who read this site. ThoughtWorks is not altogether averse to Microsoft and mentions the Azure cloud platform as something which is becoming interesting. But Windows Phone:

Despite a promising start to Windows Phone, a well thought-out user interface, and probably the best development experience of any mobile platform, we have seen several stumbles in the execution of the platform strategy by Microsoft and its partners. This makes us less optimistic about the future of the platform than we were in the last radar.

Translation: nice mobile platform, but nobody’s buying it. Then again, on Monday next week Windows Phone 8 will be properly unveiled. Still hope?

I spoke to Sam Newman, who is European Continuous Delivery Practice Lead at ThoughtWorks, a software development company. Needless to say, we talked extensively about Continuous Delivery and I will be reporting on this separately; but I was also interested in his comments on Microsoft’s Team Foundation Server (TFS).  He told me that ThoughtWorks teams often end up working with it at their .NET clients, but it is problematic. In one case, he said, 6% of productive time was absorbed dealing with TFS.

What was the problem, performance, bugs, features lacking?

When we’ve looked at the problems we’ve had, a lot of it unfortunately comes down to the version control system. It’s not very good. It’s slow, you can’t do rollbacks, sometimes things go missing, you get locks. When we talked about 6% of time, they were things like waiting for a solution to expand in Visual Studio. A lot of those issues are in the version control system.

A frustration is that you cannot use TFS with any version control system other than its own.

Every other build server in the world, from Anthill to Go to Cruise Control to Hudson, you can put in at least 10 version control systems. In TFS they are all coupled. So you can’t take the version control and point it at Subversion. That might resolve a lot of the issues.

Why is TFS so widely used? It is because it comes in the box, says Newman.

I can’t think of a single client that wanted a tool, went out into the marketplace, and selected TFS because it is the right tool for them. Most clients use TFS because it comes with their Enterprise MSDN licence.

I have tried TFS myself and found it pretty good; but then I am just testing it on small projects as a solo developer, so it is hard for me to replicate the experience of a real-world team. You would have thought that performance issues, such as waiting ages for a solution to expand in Visual Studio, could be solved by tracing the reason for the delay; but apparently this is not easy.

This is anecdotal evidence, and of course there may be plenty of TFS installations out there that work very well; I would be interested in hearing of counter examples. I am also not sure to what extent the problems apply to all versions of TFS, or whether there is improvement in TFS 2010.

Newman recognizes that anecdotal evidence is not much use: he says ThoughtWorks is trying to collect some solid data that can be used both to discuss with clients making version control and build system choices, and with Microsoft.

Performance is a feature, and makes a large contribution to user satisfaction. The first release of Outlook 2007 was extraordinarily slow in some setups, and I remember the pain of clicking on a folder and then waiting tapping my fingers while it thought about expanding. It sounds like some TFS users are having a similar experience but in Visual Studio.

Martin Fowler of ThoughtWorks gave what seemed an important session at QCon London, exploring the ethical dimension of software development with a talk called What are we programming for?. The room was small, since the organisers figured that a track on IT with a a conscience would be a minority interest; but Fowler always attracts a large audience and the result was a predictable crush.

The topic itself has many facets, perhaps awkwardly commingled. Should you walk away if your customer or employer asks you to code the wrong thing – maybe enforcing poor practice, or creating algorithms to fleece your customer’s customers? What about coding for proprietary platforms owned by vendors with questionable business practices? Fowler mentioned that around 50% of ThoughtWorks solutions are built on Microsoft .NET; and that the efforts of Bill Gates to combat malaria was something that helped him make sense of that relationship. 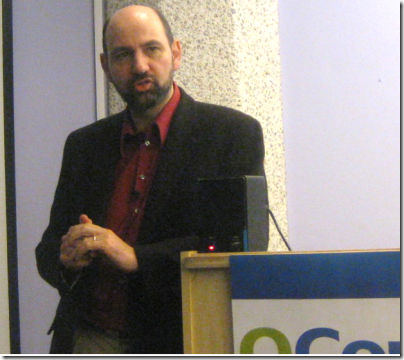 Fowler also echoed some of Robert Martin’s theme from the day before: if you build poor software, you are in effect stealing from the future revenue of your customer.

Finally, he talked about the male/female imbalance in software development, rejecting the idea that it is the consequence of natural differences in aptitude or inclination. Rather, he said, we can’t pretend to have the best people for the job while the imbalance continues. I’d add that since communication is a major theme of Agile methodology, and that females seem to have communication skills that males lack, fixing the imbalance could improve the development process in other ways.

Big questions; and Fowler had few answers. When asked for the takeaway, he said the main one is to discuss these issues more.

It is a good read, as you would expect from Thoughtworks, a software development company with a bias towards Agile methodology and a formidable reputation.

The authors divide technology into four segments, from Hold – which means steer clear for the time being – to Adopt, ready for prime time. In between are Assess and Trial.

I was interested to see that Thoughtworks is ready to stop supporting IE6 and that ASP.NET MVC is regarded as ready to use now. So is Apple iPhone as a client platform, with Android not far behind (Trial).

Thoughtworks is also now contemplating Java language end of life (Assess), but remains enthusiastic about the JVM as a platform (Adopt), and about Javascript as a first class language (also Adopt). C# 4.0 wins praise for its new dynamic features and pace of development in general.

Losers? I was struck by how cool Thoughtworks is towards Rich Internet Applications (Adobe Flash and Microsoft Silverlight):

Our position on Rich Internet Applications has changed over the past year. Experience has shown that platforms such as Silverlight, Flex and JavaFX may be useful for rich visualizations of data but provide few benefits over simpler web applications.

The team has even less interest in Microsoft’s Internet Explorer – even IE8 is a concern with regard to web standards – whereas Firefox lies at the heart of the Adopt bullet.

In the tools area, Thoughtworks is moving away from Subversion and towards distributed version control systems (Git, Mercurial).

At the start of October, ThoughtWorks became a customer of Google Apps. Although we have heard a wide range of opinions about the user experience offered by Google Mail, Calendar and Documents, the general consensus is that our largely consultant workforce is happy with the move. The next step that we as a company are looking to embrace is Google as a corporate platform beyond the standard Google Apps; in particular we are evaluating the use of Google App Engine for a number of internal systems initiatives.

A thought-provoking paper which makes more sense to me than the innumerable Gartner Magic Quadrants; I’d encourage you to read the whole paper (only 8 pages) and not to be content with my highlights.