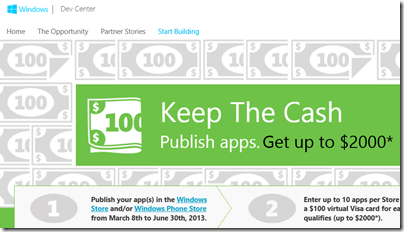 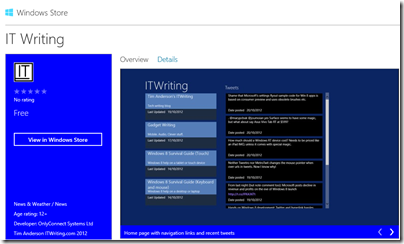 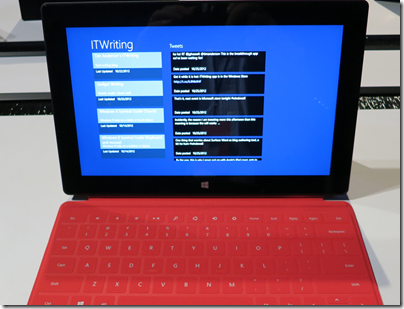 I noticed an old post here getting a lot of hits: My first Google Chrome Web Application. Unfortunately it was based on an early version of Chrome’s app format. Here is an update.

My web application in this example is this blog. I created a manifest in Notepad: 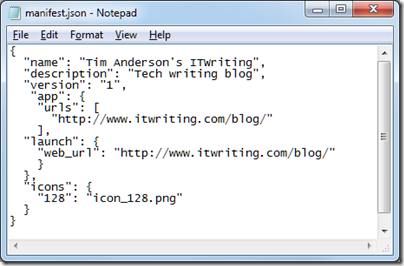 Then I put the manifest and the icon into a folder called itwriting-app. I tested it by using Chrome’s Tools – Extensions – Load unpacked extension. It worked fine. 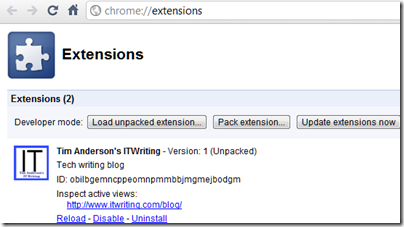 Next I compressed  the folder to a zip file. I just right-clicked in Windows and chose Send to – Compressed (zipped) folder.

Then I logged into the Developer Dashboard at the Chrome Web Store (I had to pay $5.00) and uploaded the app: 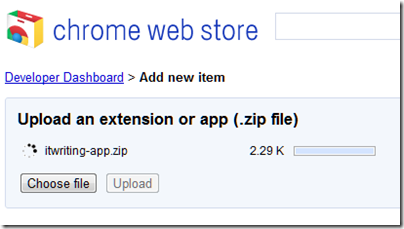 Next, I had to complete some metadata. I chose a couple of categories, uploaded the icon as the image for the app, and uploaded a screenshot of a sample article. Clicked Publish Changes and it was done. 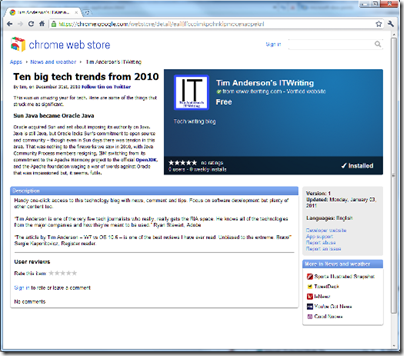 If you click Install, you get an icon in the Chrome Apps list, which appears when you open a new tab.

Of course it is just a link to a web site. Why is this interesting?

A few reasons. One is that it is easy to get started, which promotes usage.

Next, you can charge for your app. Once the user has paid, you use the Licensing API to check whether the user has paid, or is a trial user, or has not paid. This also depends on the user’s Google ID, promoting Google’s identity system as well as its payment system. Users get single sign-on if they are already logged into Google. Developers do not have to worry about storing passwords, which can be an embarrassment.

Web Apps are also interesting if you request additional permissions. There are three at the moment: geolocation, notifications, and unlimited storage. These give additional capabilities to your app. You can also enable autoupdating.

Finally, Google wants us to accept that web applications are apps too, blurring the boundaries between desktop, mobile device, and web.