At the April 2014 Build conference Microsoft made some far-reaching announcements about its .NET platform and the C# programming language. Yes, there was talk of C# 6.0, the next version, but the real changes are more profound. Specifically:

C# and Visual Basic have a new compiler, itself written in C#, code-named Roslyn. Roslyn is not just a new compiler; Microsoft now calls it the “.NET Compiler Platform”.

There is a new commitment to open source for .NET projects. Microsoft formed the .NET Foundation to oversee existing open source projects, including  ASP.NET, Entity Framework, the Azure .NET SDK, and now Roslyn as well. “When it comes to development projects we are going to operate from the premise that open source is the default. Unless there are reasons why it does not work,” said C# lead architect Anders Hejlsberg. 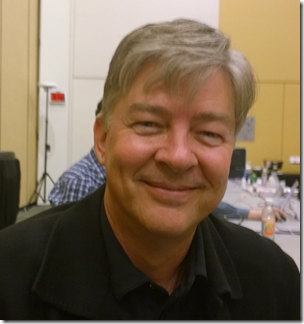 Note that open source does not mean chaos. It does mean that you can fork the project if you want – the Roslyn license is Apache 2.0 – but getting Microsoft to accept new features you have contributed will not be trivial. Hejlsberg makes the point that language features are easy to add, but impossible to take away, so extreme care is necessary.

Microsoft is also supporting cross-platform C# to a greater extent than it has done in the past. The most obvious sign of this is its cooperation with Xamarin, which provides C# compilers for iOS and Android. Xamarin’s Miguel de Icaza got a top billing at Build, and is also involved in the .NET Foundation.

There is more though. The idea of standardised C# is re-emerging:

“The last ECMA standard was C# 2.0. There wasn’t a lot of demand for it, but that demand has recently risen and we have re engaged with the ECMA community to produce a standard for C# 5.0,” said Hejlsberg.

This bears some unpacking. Why was there little demand for ECMA C#? Partly I would guess from the assumption the C# was firmly in Microsoft’s grip, with Java the obvious choice for cross-platform development. The main interest was from the Mono folk (Miguel de Icaza again), which implemented .NET for Linux and the Mac with some success, but nothing to disturb Java’s momentum.

The focus now though is on mobile, and interest in C# is stronger, mainly from Microsoft-platform developers reaching beyond Windows. There is also Unity, which uses C# as a scripting language for developing games for multiple platforms, including iOS, Android, Windows, Mac, Linux, Xbox, PS3 and Wii – PS4 is coming very soon.

You might observe that this position has been forced on the company by the rise of iOS and Android, a view which likely has some merit, but the impact it has on C# and .NET itself is still real.

I asked Hejlsberg to unpack the difference between the Roslyn project and C# 6.0, bearing in mind that both are covered on the Roslyn open source site; you can see the current status of C# 6.0 and the next Visual Basic here.

Roslyn is the name for the project that encompasses the new C#compiler and the new VB compiler and the new language services that they share. C# 6.0 is the name of the next version of the C #language which will have a specification and which will have an implementation. We are implementing C# 6.0 on the Roslyn platform. We are not going to continue to evolve our old C++ C# compiler – the C# compiler was originally written in C++ and has been evolved up through C# 5.0. That is where we are going to retire that code base, and going forward versions of C# will be built on Roslyn and therefore will be built open source. Unlike previously where, boom. C# came down from the sky with a set of features, it is going to happen more organically now, people will submit pull requests, open up issues, and you will see us work on these features. You will see them from inception to fruition.

“The C# team, the Roslyn team, the VB team, their day to day workplace now is the open source site. That is where they check-in code. It is a community in the making.

NGen is the native feature that we currently support. NGen is really, “I’m going to JIT [Just in time compile] your code and then snapshot all the data structures and dump them in a file so that I can quickly rebuild that file later when you run this particular application”. But it is the same code generator and all the same features, and JIT is still there. NGen is really a way to pre-cache the JIT output and therefore get better performance, but it adds to the size of your app because you still have all the assemblies and metadata and then the NGen image as well.

.NET Native is a completely different approach. Instead of the JIT we use the backend from the C++ compiler. You can think of it as a linker that takes as input assemblies, and as output produces a PE [Portable Executable] executable. In the process this linker or code generator will analyse all the IL [Intermediate Language] that goes into the application and it will apply a thing known as tree-shaking where it eliminates all of the code that will never execute based on known execution roots.

In other words, the public static main of your program and also whatever pieces of your app that you designate as reflectable, they also become roots. Based on that we produce an optimised exe, and into that exe we link the pieces of the framework that you are referencing. We link in a garbage collector [GC], and it looks to the operating system just like an exe. When you run it, it runs a local GC in there and it is as efficient really as C++ code.

There are some restrictions associated with .net native, mainly that you can’t just willy-nilly reflect on the whole world. You can’t just generate new code and ask for that to be jitted because they may not be a JIT compiler. We are considering allowing you to link in a JIT compiler, but there are certain execution environments which don’t permit jitting, like Xbox. If you use reflection in your lap you have to tell us what to keep reflectable, because otherwise we will optimise it away.

The preview out today is scoped to Store app x64 and ARM. We haven’t run into any technical limitation that shows it can’t be done across the breadth, it is just a matter of request and need.

Open source, native code compilation, and an innovative compiler: it adds up to huge changes for C# and .NET, positive ones as far as I can tell.

The Xamarin connection is intriguing though. Developers in general admire the technology as far as I can tell, but it is expensive, and paying out for a Xamarin subscription on top of maybe MSDN for Visual Studio is too much for some smaller organisations and does not encourage experimentation. Might Microsoft acquire Xamarin and build Visual Studio into an IDE targeting all the major mobile platforms, but with special hooks to Azure-hosted services?

That prospect makes sense to me, though it would be a shame if the energetic Xamarin culture became bogged down in big-company bureaucracy. Currently though: no news to report.