Microsoft has posted details of the forthcoming Exchange 2013, and one of the features that intrigues me is the ability to use the browser-based email client, Outlook Web Access (OWA), offline.

Since offline use is one of the primary issues with web applications, this is a key feature. It would be particularly interesting if it worked with mobile devices such as the Apple iPad or Google Android tablets.

I asked about this and was directed to this table, which states that offline access is supported in Internet Explorer 10 or later, Safari 5.1 or later, and Chrome 18 or later. Offline is not supported on mobile browsers, nor on “Windows 8 tablet”.

I have not seen Microsoft use the term Windows 8 tablet in a technical sense before. I presume it means Metro-style IE and Windows RT?

Next, I went to my preview Office 365 account on a Windows 8 tablet (ha!) but in desktop IE, and noticed that OWA already has an offline option there, which I presume is essentially Exchange 2013 though perhaps with some differences. 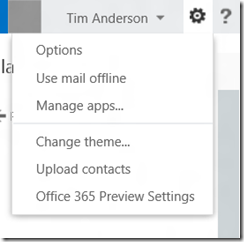 I selected the option and was prompted to confirm. 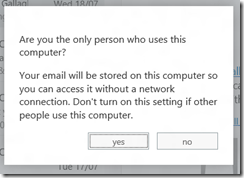 I clicked Yes and was prompted to add to favourites.

Then I closed the browser, turned on Airplane mode, and restarted.

Success! I was able to return to OWA, compose and send an email. Note the Airplane mode icon in the screen grab. 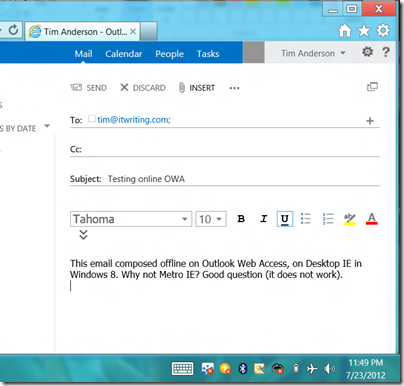 Looking at IE settings I also had an offline cache set for outlook.com. 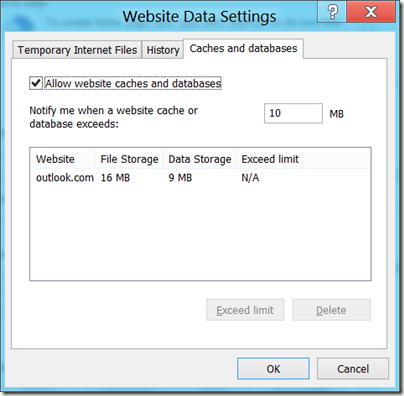 I closed the browser, re-enabled the network, and restarted.

Bad news, my first email was never sent. I tried again though, and this time confirmed that, while offline, my email was in an unsent folder. 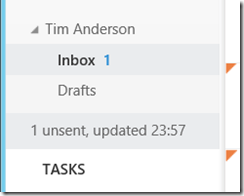 However, when I went back online I could not see it in sent items. I made a third attempt. Eventually though, both my second and third attempts succeeded and I got the email. 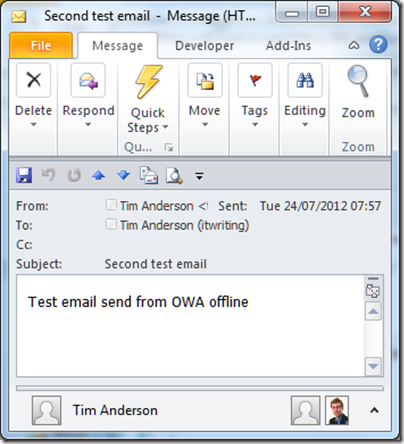 That’s good, but I have a few observations (bearing in mind that this is preview software):

1. The experience in Metro-style IE is terrible. You can enable offline there (I tried) but it does not work. And where is the cache setting for Metro-style IE, is it shared with desktop IE? Does it have one? This whole relationship between the two forms of IE 10 in Windows 8 is obscure and difficult.

2. What happened to my first email? Did I not in fact click send (I am fairly sure I did)? Losing emails is bad and can be costly.

3. This offline setting would be particularly useful on mobile devices so I would like to know what plans Microsoft has to get it working.

Microsoft is launching SQL Server 2012 on  March 7th 2012. In Microsoft’s world “launches” do not always coincide with the availability of release code, which may come before or after, but they are usually not far apart.

The big news in SQL Server 2012 is in new BI (Business Intelligence) features and the ability to import and export from the open source Hadoop framework. Microsoft is also supporting Hadoop on Windows Server and Windows Azure. Robert Sheldon has an excellent article on TechTarget which describes the Hadoop integration.

At the other end of the scale though there is a new approach to local databases, which interests me as this is the kind of thing an application developer might use for local applications. SQL Express LocalDB uses the full SQL Server Express engine but does not require a SQL Server service to be running or even installed. In summary:

A driver for LocalDB has to know how to fire up the SQL Server binaries if they are not running, which means that old drivers will not work. Microsoft has patched System.Data.SqlClient in .NET 4 to work with LocalDB.

The advantage of LocalDB over the cut-down Compact Edition is that you get full access to SQL Server features including transactions, stored procedures, geographical data types and so on. It is meant to improve on the old user instances by simplifying matters for the user: no need to run a service, and management of SQL Server completely hidden.

The disadvantage is that your app still has the overhead of SQL Server running in a separate process. A SQL Server LocalDB install also takes around 140MB, which bumps up the download size if your app is distributed on the web.

If you need a local database, it seems to me that Microsoft still has nothing that quite matches SQLite, which runs in-process, is lightning fast, and which does not require any hidden system databases.

On the other hand, it might make sense to use SQL Server if you want to integrate with a server database, or if you are familiar with coding for SQL Server.

I would like to see Windows ship with a local database engine documented as something developers can rely on being there, as with Core Data on the Mac. It would also help if the SQL Server team got together with the Office team and worked out how to get Access and SQL Server Express to use the same database engine – yes, I know Access can use SQL Server data, but it still defaults to its own .ACCDB format and JET database engine.