Here at BlackBerry Devcon Europe attendees were shown the key features of PlayBook 2.0, an update for the RIM tablet that will run on the existing hardware.

Aside from new runtimes for developers and some usability tweaks, the main changes users will notice are a new universal inbox and PIM (Personal Information Manager), and deeper integration between the PlayBook and BlackBerry smartphones.

The PIM includes an embedded web browser so that you can view HTML messages without leaving the application.

If you look in detail at a meeting, you can see the other attendees, presuming that the information is available.

One of the aims is to aggregate information drawn from social networks and from the internet. It is a compelling idea, and one that Microsoft has also used. For example, when you view an email the Outlook Social Connector automatically looks up status messages from FaceBook and LinkedIn from the author. Windows Phone also aggregates information from multiple social networks in its People hub.

RIM talked about adding web information. We were given the example of getting an email from someone and viewing recent press releases from their company within the PlayBook 2.0 PIM. If this is well implemented, it does make sense, giving you useful background without the need of a manual web search. A contact record is no longer just name, address and company, but a portal into that person’s story and current activity.

The other big new feature in PlayBook 2.0 is remote control. You can use your BlackBerry SmartPhone as a controller and input device for the PlayBook.

What is the point of this? A good question, to which the most obvious answer is that you can use the physical keypad on a BlackBerry to type on the PlayBook. This drew applause when demonstrated.

I asked for other use cases on Twitter. The main other suggestion was using a BlackBerry as a remote when your PlayBook is plugged into a screen as a media player or presenter.

The concept goes beyond this though. Here is new CEO Thorsten Heins speaking in the keynote:

Just take this idea a step further. Think about BlackBerry 10 being a platform, for mobile computing, for smartphones, so it really shows the deep integration of the BlackBerry platform. Think about having your PlayBook somewhere on your desk at your home, and you can control everything just from your BlackBerry, I think that is fantastic

Incidentally, RIM’s operating system naming is confusing. This is how it goes. BlackBerry OS up to and including 7.0 is the old smartphone OS that is being phased out. The new OS is based on QNX and first seen in the PlayBook, which runs Tablet OS 1.0. Version 2.0 of this OS, due out later this month with the features mentioned above, is called PlayBook OS 2.0.

BlackBerry 10 is the next iteration of this QNX-based OS and will run on SmartPhones as well as on the PlayBook. BlackBerry 10 is expected later in 2012, probably towards the end of the year.

RIM’s future depends on wide acceptance of BlackBerry 10. The uncomfortable question: how many mobile operating systems can succeed? It seems that Apple iOS and Google Android are well established, but the future prospects of new entrants such as BlackBerry 10 and Windows 8 is open to speculation.

Update: I visited the exhibition here and spent some time hands-on with the version of the PIM that is installed on the PlayBook devices. It is disappointing, though bear in mind that it is not, I was told, the final version (though if the final version is coming this month you would have thought it is not far off).

It seems to me that RIM is in danger of missing an important market for PlayBook here. Many RIM customers use Microsoft’s platform because of the link with Exchange. A tablet with excellent support for SharePoint and Office 365 would have obvious value, and Microsoft can be expected to tap into this with Windows 8. BlackBerry could get there first with PlayBook but it looks like this will not be the case.

I am at RIM’s Blackberry DevCon in Amsterdam (where it is so cold that the canals have frozen). Attendees have been given a free Blackberry Playbook, the neat 7” tablet running an operating system based on QNX, acquired by RIM in 2010.

The Playbook was launched in spring 2011, and sales have disappointed. Exact numbers are hard to find; the Guardian estimated that RIM ordered 2.5m devices, while Crackberry.com says 5m. How many sold? In the three reported quarters, RIM said 500,000, 200,000 and 150,000 were shipped. Prices have been falling, naturally, but it seems that there are plenty left.

Nevertheless, this is an attractive device. The operating system is smooth and the size is convenient. Why has it failed?

One factor is that the device is designed as a companion to a Blackberry smartphone. Email does not work unless you have a Blackberry, or can get by with a web browser client. RIM thereby reduced the market to existing Blackberry owners, a mistake which should be rectified when version 2.0 of the operating system is released – expected later this month.

The second problem is the the extent to which Apple owns the tablet market. When you buy an iPad you know you are buying into a strong ecosystem and that every app vendor has to support it. That is not the case with the Playbook, making it a riskier choice. RIM’s fix is to introduce support for Android apps, though there are a few caveats here. Perhaps the biggest is this: if you want to run Android apps, why not just get an Android tablet and avoid any compromises?

The Playbook is a delightful device. The big question – for RIM and other new entrants into the tablet market – is what will make it sell, other than pricing it below cost?

Amazon found an answer for its Kindle Fire: low price, Kindle brand making it an e-book reader as well as a tablet, and a business model based on its retail business. Amazon can sell the device at a loss and still make a profit.

It is not yet clear to me what RIM’s answer can be. The most obvious one is to make it truly compelling for the large market of Blackberry smartphone users, but not if that means crippling it for everyone else as with the 1.0 release.

Another factor is that the device has to be nearly perfect. On the conference device, it took me 10 minutes to send a tweet. The reason was that the supplied twitter app is really a link to the twitter web site. That in itself is not so bad, but I found the soft keyboard unwilling to pop up reliably when twitter’s tweet authoring window was open. Making a correction was particularly frustrating. A small thing; but one or two frustrations like this are enough to make a good experience into a bad one.

Version 2.0 of the operating system does promise numerous improvements though, and watch this space for a detailed review as soon as I can get my hands on it.

RIM has announced several new options for developing apps for its PlayBook tablet.

It sounds as if the Android runtime will not be perfectly compatible with real Android:

Developers currently building for the BlackBerry or Android platforms will be able to quickly and easily port their apps to run on the BlackBerry Tablet OS thanks to a high degree of API compatibility.

Nevertheless, this will be an attractive route for Android developers looking for a quick way to port to the Blackberry.

The native SDK is currently in “limited alpha release” but RIM is promising an open beta for this summer.

The deal with Unity is important too. Unity is an increasingly popular toolkit for game development and adding the Blackberry to the list of supported platforms will boost its appeal. Ideaworks Labs makes the Airplay SDK, a cross-platform toolkit which already supports Apple iOS, Android, Symbian, Samsung Bada, HP webOS and Windows Mobile.

Note that the primary SDK for the Playbook has until now been Adobe AIR; and since the UI itself uses the Flash runtime this likely still makes sense for many applications.

RIM is doing a good job of opening up its platform. It is an interesting contrast to Microsoft’s “Silverlight, XNA or nothing” approach for Windows Phone. 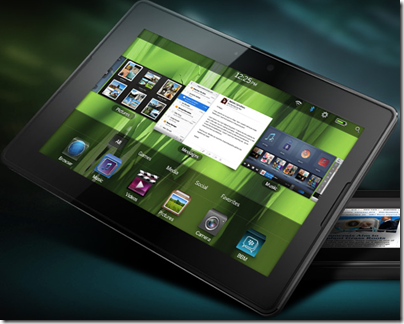