Microsoft CEO Satya Nadella has penned a rather long public letter which sets out his ambitions for the company. It is not full of surprises for those who have been paying attention, but confirms what we are already seeing in projects such as Office for iPad: Microsoft is positioning itself for a world in which the Windows client does not dominate.

The statement that stands out most to me is this one (the highlighting is mine):

Apps will be designed as dual use with the intelligence to partition data between work and life and with the respect for each person’s privacy choices. All of these apps will be explicitly engineered so anybody can find, try and then buy them in friction-free ways. They will be built for other ecosystems so as people move from device to device, so will their content and the richness of their services

This is a big change from the Windows company, and one that I will expect to see reflected in the tools it offers to developers. If Microsoft is not trying to acquire Xamarin, you would wonder why not. It has to make Visual Studio a premier tool for writing cross-platform mobile applications. It also has to address the problem that an increasingly large proportion of developers now use Macs (I do not know the figures, but observe at some developer conferences that Windows machines are a rarity), perhaps via improved online developer tools or new tools that themselves run cross-platform.

Nadella is careful to avoid giving the impression that Microsoft is abandoning its first-party device efforts, making specific mention of Windows Phone, Surface, Cortana and Xbox, for example.

Our first-party devices will light up digital work and life. Surface Pro 3 is a great example – it is the world’s best productivity tablet. In addition, we will build first-party hardware to stimulate more demand for the entire Windows ecosystem. That means at times we’ll develop new categories like we did with Surface. It also means we will responsibly make the market for Windows Phone, which is our goal with the Nokia devices and services acquisition.

Here is another statement that caught my eye:

We will increase the fluidity of information and ideas by taking actions to flatten the organization and develop leaner business processes.

The company has become increasingly bureaucratic over the years, and that is holding back its ability to be agile (though some teams seem to move at high speed regardless; I would instance the Azure team as an example).

Nadella’s letter has too many flowery passages of uncertain meaning – “We will reinvent productivity for people who are swimming in a growing sea of devices, apps, data and social networks. We will build the solutions that address the productivity needs of groups and entire organizations as well as individuals by putting them at the center of their computing experiences.” – but I do not doubt that major change is under way. 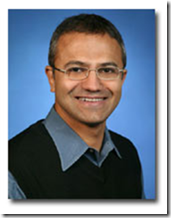