Microsoft has announced a new edition of Visual Studio called LightSwitch, now available in beta, and it is among the most interesting development tools I’ve seen. That does not mean it will succeed; if anything it is too radical and might fail for that reason, though it deserves better. Here’s some of the things you need to know.

1. LightSwitch builds Silverlight apps. In typical Microsoft style, it does not make the best of Silverlight’s cross-platform potential, at least in the beta. Publish a LightSwitch app, and by default you get a Windows click-once installation file for an out-of-browser Silverlight app. Still, there is also an option for a browser-hosted deployment, and in principle I should think the apps will run on the Mac (this is stated in one of the introductory videos) and maybe on Linux via Moonlight. Microsoft does include an “Export to Excel” button on out-of-browser deployments that only appears on Windows, thanks to the lack of COM support on other platforms.

I still find this interesting, particularly since LightSwitch is presented as a tool for business applications without a hint of bling – in fact, adding bling is challenging. You have to create a custom control in Silverlight and add it to a screen.

Microsoft should highlight the cross-platform capability of LightSwitch and make sure that Mac deployment is easy. What’s the betting it hardly gets a mention? Of course, there is also the iPhone/iPad problem to think about. Maybe ASP.NET and clever JavaScript would have been a better idea after all.

2. There is no visual form designer – at least, not in the traditional Microsoft style we have become used to. Here’s a screen in the designer: 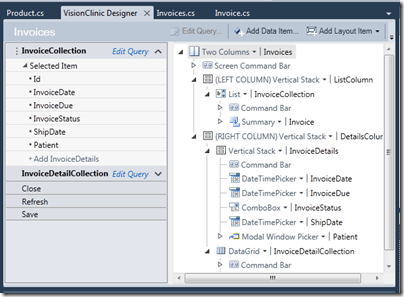 Now, on one level this is ugly compared to a nice visual designer that looks roughly like what you will get at runtime. I can imagine some VB or Access developers will find this a difficult adjustment.

On the positive side though, it does relieve the developer of the most tedious part of building this type of forms application – designing the form. LightSwitch does it all for you, including validation, and you can write little snippets of code on top as needed.

I think this is a bold decision – it may harm LightSwitch adoption but it does make sense.

3. LightSwitch has runtime form customization. Actually it is not quite “runtime”, but only works when running in the debugger. When you run a screen, you get a “Customize Screen” button at top right:

which opens the current screen in Customization Mode, with the field list, property editor, and a preview of the screen. 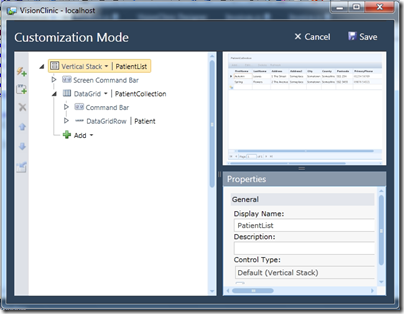 It is still not a visual form designer, but mitigates its absence a little.

4. LightSwitch is model driven. When you create a LightSwitch application you are writing out XAML, not the XAML you know that defines a WPF layout, but XAML to define an application. The key file seems to be ApplicationDefinition.lsml, which starts like this:

Microsoft has invested hugely in modelling over the years with not that much to show for it. The great thing about modelling in LightSwitch is that you do not know you are doing it. It might just catch on.

Let’s say everyone loves LightSwitch, but nobody wants Silverlight apps. Could you add an option to generate HTML and JavaScript instead? I don’t see why not. 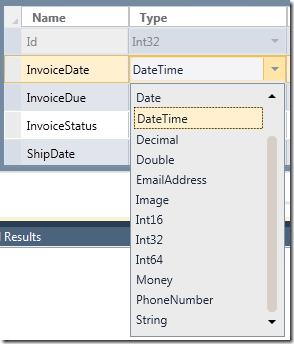 I like this. Arguably Microsoft should have gone further. Do we really need Int16, Int32 and Int64? Why not “Whole number” and “Floating point number”? Or hide the techie choices in an “Advanced” list?

6. LightSwitch is another go at an intractable problem: how to get non-professional developers to write properly designed relational database applications. I think Microsoft has done a great job here. Partly there are the data types as mentioned above. Beyond that though, there is a relationship builder that is genuinely easy to use, but which still handles tricky things like many-to-many relationships and cascading deletes. I like the plain English explanations in the too, like “When a Patient is deleted, remove all related Appointment instances” when you select Cascade delete. 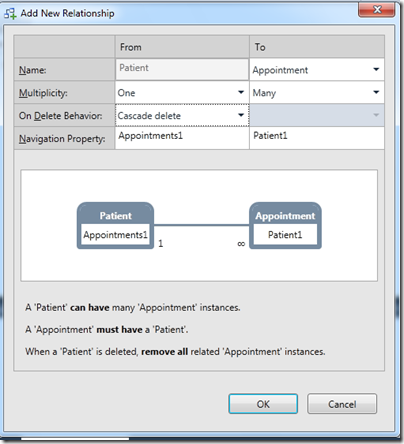 Now, does this mean that a capable professional in a non-IT field – such as a dentist, shopkeeper, small business owner, departmental worker – can now pick up LightSwitch and and write a well-designed application to handle their customers, or inventory, or appointments? That is an open question. Real-world databases soon get complex and it is easy to mess up. Still, I reckon LightSwitch is the best effort I’ve seen – more disciplined than FileMaker, for example, (though I admit I’ve not looked at FileMaker for a while), and well ahead of Access.

This does raise the question of who is really the target developer for LightSwitch? It is being presented as a low-end tool, but in reality it is a different approach to application building that could be used at almost any level. Some features of LightSwitch will only make sense to IT specialists – in fact, as soon as you step into the code editor, it is a daunting tool.

7. LightSwitch is a database application builder that does not use SQL. The query designer is entirely visual, and behind the scenes Linq (Language Integrated Query) is everywhere. Like the absence of a visual designer, this is a somewhat risky move; SQL is familiar to everyone. Linq has advantages, but it is not so easy to use that a beginner can express a complex query in moments. When using the Query designer I would personally like a “View and edit SQL” or even a “View and edit Linq” option.

8. LightSwitch will be released as the cheapest member of the paid-for Visual Studio range. In other words, it will not be free (like Express), but will be cheaper than Visual Studio Professional.

9. LightSwitch applications are cloud-ready. In the final release (but not the beta) you will be able to publish to Windows Azure. Even in the beta, LightSwitch apps always use WCF RIA Services, which means they are web-oriented applications. Data sources supported in the beta are SQL Server, SharePoint and generic WCF RIA Services. Apparently in the final release Access will be added.

10. Speculation – LightSwitch will one day target Windows Phone 7. I don’t know this for sure yet. But why else would Microsoft make this a Silverlight tool? This makes so much sense: an application builder using the web services model for authentication and data access, firmly aimed at business users. The first release of Windows Phone 7 targets consumers, but if Microsoft has any sense, it will have LightSwitch for Windows Phone Professional (or whatever) lined up for the release of the business-oriented Windows Phone.