When I heard that Telerik is bringing out a new IDE for mobile app development, I could contain my excitement, especially after learning that it is another PhoneGap/Cordova based approach, wrapping JavaScript and HTML as a native app. While speaking to Telerik’s Doug Seven though, I found myself increasingly impressed.

If that name sounds familiar, it might be because Seven was a director of Product Management in the Visual Studio team at Microsoft, and you can see that influence in the new IDE, which is called Icenium. Spot the Metro-style buttons at top left of the IDE! 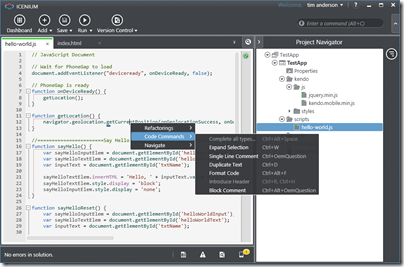 Icenium has several components. There is a Windows IDE called Graphite, illustrated above. Those on other platforms, or in distributed teams, can use Mist, which is a browser-based IDE which replicates many of the features of Graphite. There is also a set of cloud-based services to handle building apps for iPhone, iPad and Android devices. This means you do not need to install all the necessary SDKs on your own machine. Icenium also lets developers build signed iOS packages without needing to have a Mac.

The Icenium Device Simulator lets you test applications quickly on your own machine. 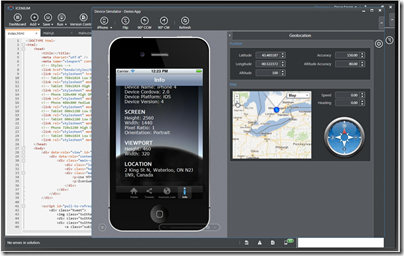 The tools look good, though I have not tried them yet, but the unique feature of Icenium is the ability to deploy and test quickly on multiple devices. Code is kept synchronized between Graphite and Mist, and also pushed out though LiveSync to multiple devices. Here is a snap of the view from Doug Seven’s desk, grabbed from his online presentation. He showed me how a code change ripples almost instantly to all these devices for testing. 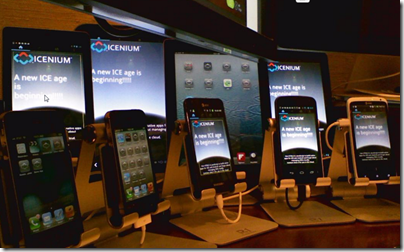 An intriguing part of this is an iOS app called Ion which is a sort of runtime shell for Icenium apps. This means you can load apps for testing onto iOS devices that are not unlocked for developer use. You can also demonstrate apps on a client’s device using Ion. Apple’s attitude to runtimes in the App Store must be softening.

Icenium supports version control using either a Git repository hosted on the service, or your own choice of URL-based Git repositories.

Pricing will be per-developer at $16.00 per month if you sign up for a year, or $19.00 per month without a contract. Once you sign up, you can use all the tools on all your machines. You can also use Telerik’s Kendo UI Mobile framework. It is free until May 1 2013.

“It’s a great comparison,” says Seven. “Adobe has the technology to make this [seamless development experience] possible, they just chose not to do it … [PhoneGap Build] is not integrated into the workflow. It’s a very manual process, I have to zip up my files, submit them to the PhoneGap Build process, then I get back these application packages that I have to manually deploy to my devices to see if it works.”

There is no support yet for mobile web apps, as opposed to apps packaged with Cordova, but this is a possibility for the future.

Like Adobe, Telerik has found WebKit and Google Chrome irresistible, despite Seven’s Microsoft background. WebKit is embedded in the Graphite IDE. You can use Mist with any modern browser, though “the one limitation is that the browser-based device simulator does require Chrome,” though he add that in general, “I use Mist on my iPad all the time.”

The story seems to be that Fiddler was a spare time activity for Lawrence, who will now be able to focus on it exclusively. Telerik’s Christopher Eyhorn says:

This was a natural extension because Fiddler is already in use as the core technology behind Test Studio’s load and performance features.  Additionally, we gain a formidable competitive edge over other tools as both Eric and Fiddler join the Test Studio product family.

Eyhorn also refers to “our commitment to keeping Fiddler free and making further investments into the tool,” so it looks as if its freeware status is safe for the time being. Fears for its future have already been expressed, but Eyhorn says:

Please don’t judge us by the actions of our competitors; we will earn your trust through our actions.

He adds that Fiddler is installed over 10,000 times every weekday. The website has attracted over 5 million unique visitors so far this year, showing that maintaining a popular freeware tool represents a great PR opportunity. 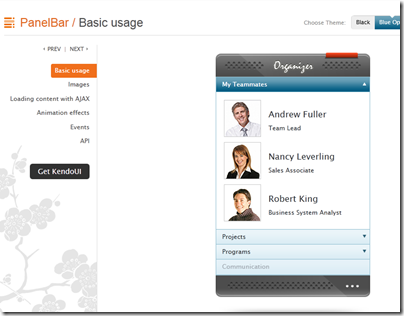 Telerik seems to be treading a careful path, maintaining its strong links to the .NET developer community while also creating a framework that can be used on other platforms.

I spoke to Todd Anglin, VP of HTML5 tools. Why the support for ASP.NET MVC – is Telerik seeing this becoming more popular than Web Forms, the older ASP.NET approach to web applications?

“Something in the range of 70% of ASP.NET developers are on web forms. We do see a bit of a trend that as they start new projects, developers are adopting ASP.NET MVC and HTML5, which is where it makes sense to use Kendo UI,” he told me.

The main reason though is that Kendo UI is less suitable for Web Forms, where more of the client-side code is generated by the framework. “Web Forms are a very high level abstraction,” said Anglin. “With MVC developers are a little closer to the metal.”

That said, he is not ruling out a Web Form wrapper for Kendo UI long-term.

Anglin says Kendo UI’s use of JQuery is a distinctive feature.  “Over the last few years JQuery has clearly risen above the pack to be the most common core Javascript library and the one most developers are familiar with. Unlike most commercial libraries out there Kendo UI chooses the JQuery core as the starting point and builds on that, so developers that adopt Kendo UI have a smoother on-ramp.”

Kendo UI supports both mobile and desktop web applications, but with different controls. “We believe that developers should offer experiences that are tailored to each device class, which is why you have Kendo UI web for keyboard and mouse, and Kendo UI mobile with a mobile-specific interface. We share code behind that, like the data source, between web and mobile, but we don’t think the interface on a mobile device should be the same as you show on a desktop browser,” said Anglin.

What about the tools side? Although Anglin says “We want to be agnostic on tools”, there is particularly good support for Visual Studion. “Kendo UI integrates with anything that supports HTML and JavaScript well, which includes the latest version of Visual Studio. We are delivering full vsdoc support for Visual Studio so that developers in that environment get Intellisense for JavaScript. But if you’re on a Mac you can use other tools,” he told me.

More interesting is a forthcoming cloud IDE. “We’ve just revealed a new tool called Icenium which is a cloud-based development environment for creating apps in HTML and JavaScript. It’s an incredible environment for building apps with Kendo UI.”

How about HTML5 apps that target the Windows Runtime (Metro) in Windows 8 – will Kendo UI work there? Apparently not:

“It’s certainly something we’ve paid attention to. Telerik’s primary position for Windows 8 runtime and Windows 8 development is with the traditional .NET targeted tools. Our RAD tools later this year will focus on introducing XAML and HTML tools for Windows Runtime. The HTML tools that we introduce will have a shared engineering core with Kendo UI, but we’ll make a tool that is specifically targeted at that runtime.