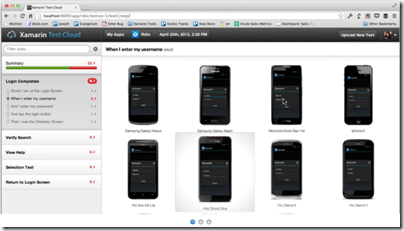 Microsoft is beginning to talk in detail about the next version of Visual Studio, though currently mostly in the area of ALM (Application Lifecycle Management) tools.

With Visual Studio vNext we are enabling you to use your favorite unit testing framework integrated deeply into the IDE. We will support MS Test, xunit, and nunit with vNext. You will also be able to target both .NET and native C++ code. Adding test frameworks is an extensibility point as well so if you don’t see your favorite one listed here, you can easily add it.

Storyboarding in PowerPoint
This is not exactly a Visual Studio feature; but the new version will include a PowerPoint plug-in and templates that lets you mock up a user interface. Why bother, when Microsoft already has Sketchflow in Expression Blend, and tools in Visio for laying out a GUI? Apparently many users are more comfortable in Office.

The thinking here is that when developers are interrupted they lose the flow of their work. Context switching lets you shelve code changes, open windows and other activity tied to the current task. You can then do other work; when you later resume the task Visual Studio recovers its state.

Team Explorer is the connector and window in Visual Studio that forms the client for Team Foundation Server. This has been revamped for the new version, and now uses “full asynchronous communication” to improve load time and responsiveness. There are new views for common categories of information, including work items, pending changes, builds, reports and bugs.

There are new tools in the Web Access client for Team Foundation Server for feedback and collaboration on projects using Agile methodology. Backlogs shows features to be implemented in a sprint, a unit of project iteration. The Task Board shows the backlog in a new visual view.

A new connector for Project Server enables project-style views of project progress, such as Gantt charts.

A new feedback mechanism aimed at stakeholders lets users enter feedback into Team Foundation Server. Tools include a web recorder that lets users comment on actions in a web application with linked recordings.

This is a code quality feature that analyses a project looking for common code that should be refactored into a shared block.

Code Review lets team members comment on code, similar in some ways to a commented document in Word.

“Any team up and running within 30 seconds” is Microsoft’s claim for a new hosted option for Team Foundation Server. An exaggeration no doubt; but since a full-featured TFS takes some effort and infrastructure to implement, the hosted option will be welcome.

Visual Studio tends to be synchronized to some extent with new versions of Windows, so I would guess we will learn more about Visual Studio vNext at the Professional Developers Conference (though it may be called something else) in Anaheim on September 13-16 this year.

You can read more about Visual Studio vNext on Jason Zander’s blog and in a white paper [pdf].