I have been trying out Visual Studio LightSwitch, which has an option to deploy apps to Windows Azure.

Of course I wanted to try this,  and after a certain amount of hassle generating certificates and switching between Visual Studio LightSwitch and the Azure management portal I succeeded. 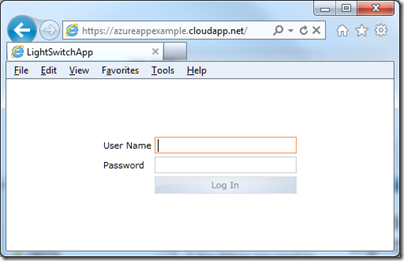 I doubt I would have made it without this step by step guide by Andy Kung. The article begins:

One of the many features introduced in Visual Studio LightSwitch Beta 2 is the ability to publish your app directly to Windows Azure with storage in SQL Azure. We have condensed many steps one would typically have to go through to deploy an application to the cloud manually.

Somewhere between 30 and 40 screens later he writes:

The last step shows you a summary of what you’re about to publish. FINALLY! Click Publish.

We just have to imagine how many screens there would have been if Microsoft had not condensed the “many steps”. The result is also not quite right, because it uses self-signed certificates that will present security warnings when you use the app. For a product supposedly aimed at non-developers it is all hopelessly difficult; but I guess techies are used to this kind of thing.

I was not content though. First, I wanted to use an Extra Small instance, and LightSwitch defaults to a Small instance with no obvious way to change it. I cracked that one. You switch the view in Solution Explorer to the File view, then find the file ServiceDefinition.csdef and edit the vmsize attribute:

It worked and I had an Extra Small instance.

I was still not satisfied though. I wanted to use Remote Desktop so I could check out the VM Azure had created for me. I could not see any easy way to do this in the LightSwitch project, so I created another Azure project and configured it for Remote Desktop access using the guide on MSDN. More certificate fun, more passwords. I then started to publish the project, but bailed out when it warned me that I was overwriting a previous deployment.

Then I copied the likely looking parts of ServiceDefinition.csdef and ServiceConfiguration.cscfg from the standard Azure project to the LightSwitch project. In ServiceDefinition.csdef that was the Imports section and the Certificates section. In ServiceConfiguration.cscfg it was all the settings starting Microsoft.WindowsAzure.Plugins.Remote…; and again the Certificates section. I think that was it.

It worked. I published the LightSwitch app, went to the Azure management portal, selected the instance, and clicked Connect.

What I found was a virtual Quad-Core Opteron with 767MB RAM and running Windows Server 2008 Enterprise SP2. It seems Azure does not use Server 2008 R2 yet – at least, not for Extra Small instances.

750MB RAM is less than I would normally consider for Server 2008 – this is Extra Small, remember – but I tried using my simple LightSwitch app and it seemed to cope OK, though memory is definitely tight. 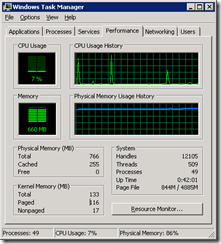 This VM is actually not that small in relation to many Linux VMs out there, happily running Apache, PHP, MySQL and numerous web applications. Note that my Azure VM is not running SQL Server; SQL Azure runs on separate servers. I am not 100% sure why Azure does not use Server Core for VMs like this. It may be because server core is usually used in conjunction with GUI tools running remotely, and setting up all the permissions for this to work is a hassle.

I took a look at the Event Viewer. I have never seen a Windows event log without at least a few errors, and I was interested to see if a Microsoft-managed VM would be the first. It was not, though there are a mere 16 “Administrative events” which is pretty good, though the VM has only been running for an hour or so. There were a bunch of boot-start drivers which failed to load: 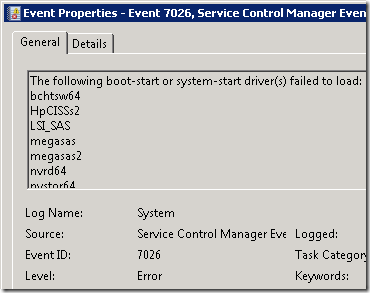 and this, which I would describe as a typical obscure and probably-unimportant-but-who-knows Windows error:

The Azure VM is not domain-joined, but is in a workgroup. It is also not activated; I presume it will become activated if I leave it running for more than 14 days.

Internet Explorer is installed but I was unable to browse the web, and attempting to ping out gave me “Request timed out”. Possibly strict firewall rules prevent this. It must be carefully balanced, since applications will need to connect out.

The DNS suffix is reddog.microsoft.com – a remnant of the Red Dog code name which was originally used for Azure.

As I understand it, the main purpose of remote desktop access is for troubleshooting, not so that you can install all sorts of extra stuff on your VM. But what if you did install all sorts of extra stuff? It would not be a good idea, since – again as I understand it – the VM could be zapped by Azure at any time, and replaced with a new one that had reverted to the original configuration. You are not meant to keep any data that matters on the VM itself; that is what the Azure storage services are for.