I attended a Microsoft Cloud Day in London organised by the Azure User Group; I booked this when Technical Fellow Mark Russinovich was set to attend, but regrettably he cancelled at a late stage. I skipped the substitute keynote by UK Microsoftie Dave Coplin as I heard the very same talk earlier this month, so arrived mid-morning at the venue in Whitechapel; not that easy to find amid the stalls of Whitechapel Market (well, not quite), but if you seek out the Whitechapel branch of the Foxcroft and Ginger cafe (not known to Here Maps on Windows Phone, incidentally) then you will find premises upstairs with logos for Barclays Accelerator and Microsoft Ventures; something to do with assisting the flow of cash from corporate giants desperate for community engagement to business start-ups desperate for cash.

Giving technical presentations is hard, and while I admired Richard Conway’s efforts at showing how, with some PowerShell, he could transform some large dataset into rows of numbers using the magic of Azure HDInsight I didn’t think it quite worked. Beat Schwegler dived into code to explain the how and why of Azure Notification Hubs, a service which delivers push notifications to mobile apps; useful material, but could have been compressed. Then there was Richard Astbury at software development company two10degrees who talked about Project Orleans, high scale applications via “an Actor Model framework of programmable in-memory objects”; we learned about grains and silos (or software equivalents) in a session that was mostly new to me.

At the break I chatted with a somewhat bemused attendee who had come in the hope of learning about whether he should migrate some or all of his small company’s server requirements to Azure. I explained about Office 365 and Azure Active Directory which he said was more relevant to him than the intricacies of software development. It turns out that the Azure User Group is really about software development using Azure services, which is only one perspective on Microsoft’s cloud platform.

For me the most intriguing presentation was from Michael Delaney at ElevateDirect, a young business which has a web application to assist businesses in finding employees directly rather than via recruitment agencies. His company picked Amazon Web Services (AWS) over Azure two and a half years ago, but is now moving to Microsoft’s cloud. 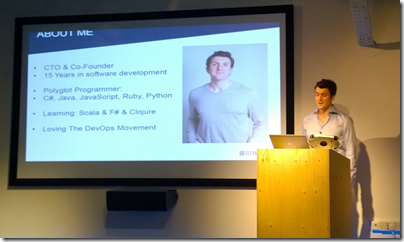 Why did he pick AWS? He is not a typical Microsoft-platform person, preferring open source products including Linux, Apache Solr, Python and MySQL. When he chose AWS, Azure was not a suitable platform for a mainly Linux-based application. However, he does prefer C# to Java. According to Delaney, AWS is a Java-first platform and he found this getting in the way of development.

Azure today, says Delaney, has the first-class support for Linux that it lacked a few years back, and is a better platform for C# applications than AWS even though AWS does support Windows servers.

Migrating the application was relatively straightforward, he said, with the biggest issue being the move from Amazon S3 (Simple Storage Service) to Azure Storage, though he overcame this by abstracting the storage API behind his own wrapper code.

Azure is not all the way there though. Delaney is disappointed with the relational database options on offer, essentially SQL Server or third-party managed MySQL from ClearDB. He would like to see options for PostgreSQL and others. He would also like the open source Elastic Search to be offered as an Azure service.

There was a panel discussion later at which the question of Azure’s market perception was discussed. Most businesses, according to one attendee, think of AWS as the only option for cloud, even if they are Microsoft-platform businesses for whom Azure might be more suitable. It is a branding problem caused by the AWS first-mover advantage and market dominance, said Microsoft’s Steve Plank.

I would add that Azure is relatively new, at least in its new incarnation offering full IaaS (infrastructure as a service). AWS is also ahead on the number and variety of services on offer, and has not really messed up, which means there is little incentive for existing users to move unless, like Delaney, they find some aspect of Microsoft’s platform (in his case C#) particularly compelling.

This leads me back to the bemused attendee. It seems to me that Azure’s biggest advantage is Azure Active Directory and seamless integration with Office 365. Having said that, it is not difficult to host an application on AWS that uses Azure Active Directory, but there may be some advantage in working with a single cloud provider (and you can expect fast low-latency networking between Azure and Office 365).