Microsoft has announced the integration of Azure websites with Azure virtual networks, including access to on-premise resources if you have a site-to-site VPN.

The Virtual Network feature grants your website access to resources running your VNET that includes being able to access web services or databases running on your Azure Virtual Machines. If your VNET is connected to your on premise network with Site to Site VPN, then your Azure Website will now be able to access on premise systems through the Azure Websites Virtual Network feature.

Azure websites let you deploy web applications running on IIS (Microsoft’s web server) hosted in Microsoft’s cloud. The application platform can be framework can be ASP.NET, Java, PHP, Node.js or Python. There are Free, Shared and Basic tiers which are mainly for prototyping, and a Standard tier which has auto-scaling features, managed through Microsoft’s web portal: 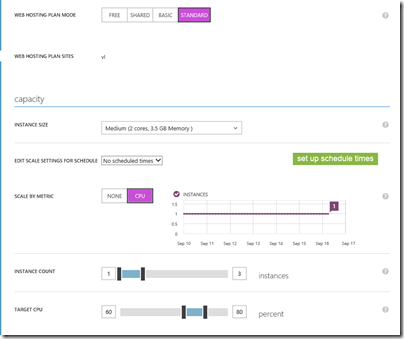 The development tool is Visual Studio, which now has strong integration with Azure.

Integration with virtual networks is a significant feature. You could now host what is in effect an intranet application on Azure if it is convenient. If it is only used in working hours, say, or mainly used in the first couple of hours in the morning, you could scale it accordingly.

Have a look at that web configuration page above, and compare it with the intricacies of System Center. It is a huge difference and shows that some parts of Microsoft have learned that usability matters, even for systems aimed at IT professionals.