I have been doing a little work with Microsoft’s Azure platform recently. A common requirement is that you want a VM which is internet-accessible with a custom domain, for which the best solution is to create a A record in your DNS pointing to the IP number of the VM. In order to do this reliably, you need to reserve an IP number for the VM; otherwise Azure may assign a different IP number if you shut it down and later restart it. If you keep it running you can keep the IP number, but this also means you are have to pay for the VM continuously.

What if you want to assign a reserved IP number to an existing VM? One suggestion is that you can capture an image from the VM, and then create a new VM from the image, complete with reserved IP. I went partially down this route but came unstuck because Azure for some reason captured the image into a different region (West Europe) than the region where the VM used to be (North Europe). When I ran the magic PowerShell script, it complained that the image was in the wrong region. I then found a post explaining how to move images between regions, which I did, but the metadata of the moved image was not quite the same and creating a new VM from the image did not work. At this point I realised that it would  be easier to recreate the VM from scratch.

Note that when reserved IP number were announced in May 2014, program manager Mahesh Thiagarajan said:

The platform doesn’t support reserving the IP address of the existing Cloud Services or Virtual machines. We expect to announce support for this in the near future.

You can debate what is meant by “near future” and whether Microsoft has already failed this expectation.

There is another wrinkle here that I am not clear about. Some Azure VMs have special pricing, such as those with SQL Server pre-installed. The special pricing is substantial, often forming the largest part of the price, since it includes licensing fees. What happens to the special pricing if you fiddle with cloning VMs, creating new VMs with existing VHDs, moving VMs between regions, or the like? If the special pricing is somehow lost, how do you restore it so SQL Server (for example) is still properly licensed? I imagine this would mean a call to support. I have not seen any documentation relating to this in posts like this about moving a virtual machine into a virtual network.

And there’s another thing. If you want your VM to be in a virtual network, you have to do that when you create it as well; it is a similar problem.

While I am in complaining mode, here is another. Creating a VM with PowerShell is easy enough, but you do need to know the image name you are using. This is not shown in the friendly portal GUI: 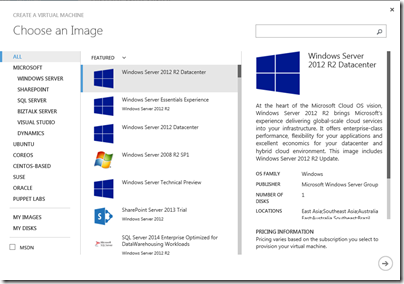 In order to get the image names, I ran a PowerShell script that exports the available images to a file. I was surprised how many there are: the resulting output has around 13,500 lines and finding what you want is tedious.

Azure is mostly very good in my experience, but I would like to see these annoyances fixed. I would be interested to hear of other things that make the cloud admin or developer’s life harder than it should be.

2 thoughts on “Reserved IPs and other Microsoft Azure annoyances”