Microsoft has completed Visual Studio 2015, the latest version of its all-encompassing development tool. You can download it here. Today is also the release day for TypeScript 1.5 (a language which compiles to JavaScript)

Windows 10 is released in just 9 days, so all eyes will be on this and its new/old app platform – the Universal Windows Platform, based on the Windows Runtime, as found in Windows 8, but considerably revised so that developers can in theory write one app and run it on any Windows 10 device, from PC to tablet to phone to Xbox to HoloLens, and sell or distribute it from a unified Windows Store.

Microsoft CEO Satya Nadella recently confirmed that the Windows Store is a key part of the Windows 10 strategy:

Why then make all these changes to the Start Menu with Windows 10? It’s not because I just want to bring back the old. It’s because that’s the best way to improve the liquidity [of] our store. Windows 8 was great except that nobody discovered the store. In Windows 10, the store is right there and done in a tasteful way.

The Store is more visible in Windows 10 than in 8 because in Windows 10 there are no longer two separate environments (Metro and desktop), but only one (desktop). Windows Runtime apps run in desktop windows. This makes the experience a little worse for tablet users, but the advantage is that now desktop users are more likely to interact with the Store, and more likely to use the apps they install, since they run in a familiar environment.

Another key change is “Project Centennial”, which I wrote up for the Register here. This lets developers package desktop apps for delivery from the Store, using app virtualisation (based on an Enterprise product called App-V). If Microsoft gets this right, Project Centennial will be the preferred way to deliver most desktop apps, since it is both easier and safer for the user.

If the Store does take off (and if it does not, Windows 10 will in part have failed), then Visual Studio will be the key tool for created or repackaging apps for Windows.

Windows 10 is important, but so too is Azure, Microsoft’s cloud platform. Visual Studio has a key role here, too. Microsoft has an entire stack, including Windows as both operating system and development environment, Visual Studio for coding and testing, and Azure for hosting cloud applications. Since the early days of Azure, the development experience has improved, so that with a modest understanding of the ASP.NET MVC framework you can go from an idea to a working demo, hosted on Azure, that you can show customers, in a short space of time.

There is also a new Cloud Explorer in Visual Studio which lets you view Azure resources from the IDE. 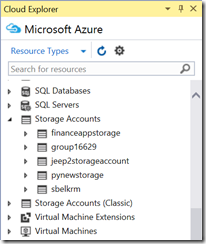 Mobile is Microsoft’s weak point, but the the company has made efforts to support Android and iOS both through mobile service back-ends hosted on Azure, and by supporting various approaches to building cross-platform apps. Visual Studio 2015 includes Xamarin project types, though out of the box these just tell you to go and install Xamarin, which lets you build Android and iOS apps with C#, subject to a separate Xamarin subscription.

Another option is to use Microsoft’s new iOS tools to code in Visual Studio while targeting Apple’s mobile platform, though this does require a Mac running a remote agent.

There is also Visual Studio Tools for Apache Cordova, where you code in JavaScript and wrap the results as native apps for both Windows and mobile platforms.

Visual Studio comes with an Android emulator, based on Hyper-V, for debugging either Xamarin or Cordova apps. Xamarin also offers its own emulator and I am not sure how these compare.

In addition to the above, Visual Studio 2015 introduces C# 6.0, Visual Basic 12, the Roslyn compiler platform which enables new IDE features, and .NET Core which is an open source, cross-platform fork of the .NET Framework. Thanks to .NET Core, the latest version of ASP.NET runs on Mac and Linux as well as Windows.

Despite Microsoft’s new cross-platform focus, Visual Studio itself runs only on Windows. In a world of Mac-wielding developers that is a problem, so the company has come up with Visual Studio code, an editor with some IDE features that runs on Window, Mac and Linux. Other options for non-Windows developers are to run Windows in an emulator such as Parallels, or on a virtual machine hosted in the code (Azure has suitable pre-baked images with Visual Studio), or to use third-party tools.

Visual Studio is a critical product then, but is it really done? Although you can download the final product today, many parts are not available (Project Centennial) or still in beta (ASP.NET 5 is beta 5). This is a milestone though, and credit to the team for bringing it out in advance of Windows 10 (I recall some Windows releases where Visual Studio was still in preview on release day).