I’ve just listed an MP3 player for sale on eBay in the UK. I was surprised to see that I was required to accept PayPal and only PayPal for the transaction, making the “Decide how you’d like to be paid” section of the form redundant:

It is not even possible to state that someone who collects personally may pay cash.

As I understand it, eBay is not applying this rule to all transactions. I suspect this one is regarded as higher risk because it is electronics. The company justifies it on the grounds of security; but since eBay owns PayPal, and gets a double-dip on the fees for transactions processed by PayPal, it has other incentives.

I don’t like this. It is a step backwards; I prefer to have control over what payments are acceptable. I still listed it though, since Amazon (the obvious alternative) is even more expensive, and also acts as payment provider.

eBay has run into some trouble over this policy in Australia; I wonder if the UK will make a similar fuss?

Update: I’ve discovered that eBay UK is now forbidding payments other than PayPal on the following types of sale:

2) Sellers listing in these categories:

There are some broad categories there. Further, I presume that once eBay starts restricting some sales to PayPal only, it will be tempted to extend the list further. 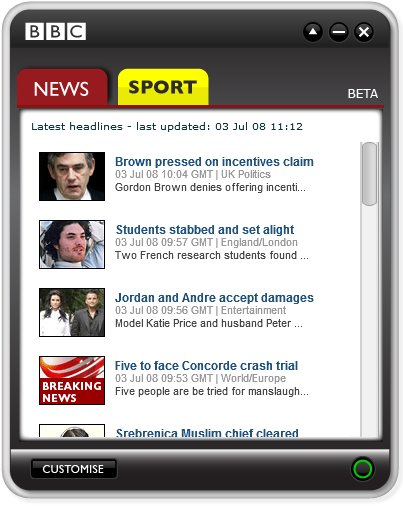 I was disappointed when my first efforts to use the BBC’s streaming iPlayer beta failed. Whatever content I chose, I got the message: This content isn’t available at the moment.

Right-clicking the player lets you copy a further error message, which says:

At first I blamed beta unreliability; then when it continued I wondered if it could be a firewall issue. I use Microsoft’s ISA Server. I looked at the log, and noticed that traffic on port 1935 was being blocked. I added a new protocol which I called iPlayer, for outbound TCP traffic on port 1935. I added this to the web access rule in ISA Server. Now it works. 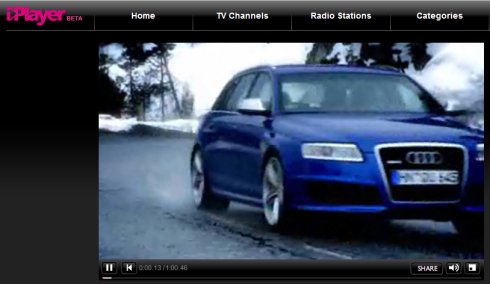 It’s a great service. The quality is fine. For some reason I care deeply about audio quality when listening to music, but when it comes to most video content, I mind much less.

Note: I don’t know if this is the only firewall issue with iPlayer, or if the port may change in future. Others have fixed similar issues just by clearing cookies or their browser cache. All I can say is that this fixed the problem for me.

I also think that the BBC’s player could display a more helpful error message; and I’d like to see technical information on what the requirements are. I couldn’t find anything useful here.

Not a pictorial version of Esperanto; rather, a set of design guidelines for bbc.co.uk:

The global visual language is a set of guidelines which aim to bring more consistency to the site by introducing an underlying design grid and consistent design patterns, icons, buttons, image sizes and a pan-BBC audio/video player.

according to BBC interaction designer and blogger Ben Hanbury. His main focus is the revised iPlayer site, which has the last seven days of the BBC’s TV and radio output available on-demand via a media player based on Flash – Adobe must be delighted.

That said, the new iPlayer site is one of the few examples I’ve known where Flash content does not play reliably. On my normal PC I get the useless and inaccurate message, “This content isn’t available at the moment.” Seems to be a firewall issue. I’ll post again if I can work out exactly what the problem is.

I am beginning to regret my pretty permalinks. Apparently it broke the RSS feed for some subscribers. The problem was caused by a combination of factors. When I started this blog, I used a different blog engine; and when I migrated to WordPress I fixed it so that the old feed URL still worked. Moving to pretty permalinks broke that feed, although the normal WordPress feeds still worked. There was no error; the feed was just empty. The reason it broke is … something to do with redirects. Fixed now.

Apologies if this affected you – I have not been as quiet as you may have thought.

Measuring by new features alone, Subversion 1.5 is our biggest release since version 1.0 became available in February 2004.

I am a contented Subversion user, so took a look at the changes. Top of the list is “merge tracking”, though it is described as “foundational” which means that although the basic support is there, there is performance and feature work which remains to be done. From the user’s perspective, the difference is that branching and merging is just easier than before, as explained by Ben Sussman:

Other changes include sparse checkouts (when you only want to grab a small part of a repository), and changelists, a client feature which lets you tag a set of files under a changelist name and work on them as a group. There are also improvements aimed at making Subversion better suited to large-scale deployments using multiple servers. Subversion is still a centralized rather than a distributed SCM system, but 1.5 is better suited for use in a distributed manner. No doubt the Subversion team is aware of the increasing interest in Git, a distributed system. There are also numerous bug-fixes and performance tweaks. The changes are described here.

I want to move to Subversion 1.5 but it is not that easy. Compatibility is good, in that older clients work with 1.5 servers and vice versa, the main proviso being that you cannot mix several versions of the Subversion client with the same working copy. That is not likely to be a problem for most users.

The difficulty I encountered is that mainstream Linux distributions still have older versions of Subversion in their stable repositories. Ubuntu, for example, has version 1.4.4. My most-used Subversion repositories are on a Debian server, which also has an old version. I don’t want to switch the server to sid, Debian’s development distribution, and mixing packages is often problematic. I could do a manual installation I guess; but instead I will be patient.

I did install 1.50 on Windows, for an intranet repository. I used the Collabnet download. All I needed to do was to inform the installer of the location of my existing repository, and then copy a few lines from the old Apache 2.0 configuration file to the new Apache 2.2 configuration file. Everything works fine. I also updated TortoiseSVN on the Windows clients.

One of the advantages of Subversion (or any SCM) repositories over synched folders like those in Microsoft’s Live Mesh or Apple’s MobileMe (as I understand it) is that you get version history. I regard this as a key feature. The problem with synchronization is that you might overwrite a good copy with a bad one. It is easy to do; it might be caused by user error, or a bug in your word processor, or a failing hard drive. Automatic synch (un)helpfully replicates the bad copy all over. Versioning means you can just rollback to the good one.

Last month I reconfigured this blog to use WordPress pretty permalinks. I didn’t rush to do this because I don’t mind the default, where the post is identified by a numeric url argument. The new permalinks do look nicer though, and some claim they help search engines, though I haven’t noticed any impact on traffic. The old links still work as well, so nothing got broken.

One advantage of the new arrangement is that awstats does a better job of reporting page views. I can now easily see which posts are the most read. I thought that might be the newer posts, but it is not. The two posts most read last month, by some margin, are both on why Outlook 2007 is slow. The next is one on trouble installing Adobe CS3. Clearly, these are very common frustrations; users hit Google and these posts have a high ranking for these particular subjects.

I value these stats. They tell me (as if I did not already know) that Microsoft has a significant problem with Outlook 2007 performance; and that Adobe needs to work on its installer for Creative Suite. Web 2.0 is great for product feedback.

I am going to write about my life as a music fan, for no other reason than that I want to. The story starts in late 1963. I was 4, nearly 5. We lived in a big old farmhouse in Cheshire in north-west England; there was not a record player in the house. There was, however, a radio or two; and I recall this song being played.

I don’t know why I remember it, except that it is catchy as hell, and my dad complained about the lyrics. Unfortunately I don’t recall exactly what he said about them, but I can imagine … simplistic, repetitive, brainless, something like that. He was a lover of words and a published poet; his opinion was worth listening to.

In dad’s defence, I am sure it was not at all obvious that this is a great song. Somehow it captures universal human emotions in a way that almost anyone can relate to. Being a bit annoying to a man of my dad’s generation (he was 52) was part of the appeal as well.

As for me, at the time I didn’t have any opinion about the song. I recognized it though, and it is my first musical memory. It’s good to have one that has withstood the passing years so well.