It is all very well expressing opinions on which technologies are hot and which are struggling, but what is happening in the real world? It is hard to get an accurate picture – surveys tend to have sampling biases of one kind or another, and vendors rarely release sales figures. I’ve never been happy with the TIOBE approach, counting mentions on the Internet; it is a measure of what is discussed, not what is used.

Another approach is to look at job vacancies. This is not ideal either; the number of vacancies might not be proportionate to the numbers in work, keyword searches are arbitrary and can include false positives and omit relevant ads that happen not to mention the keywords. Still, it is a real-world metric and worth inspecting along with the others. The following table shows figures as of today at indeed.com (for the US) and itjobswatch (for the UK), both of which make it easy to get stats.

Update – for the UK I’ve added both permanent and contract jobs from itjobswatch. I’ve also added C, C++, Python and F#, (which hardly registers). For C I searched Indeed.com for “C programming”.

A few quick comments. First, don’t take the figures too seriously – it’s a quick snapshot of a couple of job sites and there could be all sorts of reasons why the figures are skewed.

Second, there are some surprising differences between the two sites in some cases, particularly for Flash – this may be because indeed.com covers design jobs but itjobswatch not really. The difference for Ruby surprises me, but it is a common word and may be over-stated at Indeed.com.

Third, I noticed that of 892 Azure jobs at Indeed.com, 442 of the vacancies are in Redmond.

Fourth, I struggled to search for Flex at Indeed.com. A search for Flex on its own pulls in plenty of jobs that have nothing to do with Adobe, while narrowing with a second word understates the figure.

The language stats probably mean more than the technology stats. There are plenty of ads that mention C# but don’t regard it as necessary to state “ASP.NET” or “WPF” – but that C# code must be running somewhere.

Conclusions? Well, Java is not dead. Silverlight is not unseating Flash, though it is on the map. iPhone and Android have come from nowhere to become significant platforms, especially in the USA. Beyond that I’m not sure, though I’ll aim to repeat the exercise in six months and see how it changes.

If you have better stats, let me know or comment below.

SapphireSteel Software is poised to release Amethyst, which lets you develop Flash and Flex applications with Microsoft’s Visual Studio 2008 or 2010.

Why bother? There’s two aspects to this. One is simply the comfort factor: if you are a .NET developer used to Visual Studio, but now working on Flash or Flex, this could be an easier way in than the Eclipse-based Flash Builder. There is a visual designer, a full-featured debugger, a property inspector with sections for properties, events, effects and styles, for example, and double-clicking an event generates an event handler as you would expect.

The other factor is areas where Amethyst can improve on what Flash Builder offers. One example is ActionScript refactoring, disappointing in Adobe’s product. Amethyst is not brilliant, but does have a few extras including Extract Method, Encapsulate Field and Extract Interface.

Another useful feature is that Amethyst can share projects with Flash or Flash Builder. Before you get excited, it does not do the magic you might want, Visual Studio editing of .fla files with embedded ActionScript. It does work reasonably seamlessly though: you can open .fla file in the Flash IDE by clicking within Amethyst.

This would have been even more interesting if Adobe had not added a measure of Flash Builder integration in Flash Professional CS5; and that is the challenge facing SapphireSteel – how to keep up with Adobe’s official development tools.

I’ve only played briefly with Amethyst but although I’ve been impressed with it in some ways, I also found myself missing features in Flash Builder, such as the Connect to Data wizards, and the view state management.

It is early days though; and I would be interested to hear from others who have tried Amethyst on what they do or do not like about it.

Price is not yet stated, but SapphireSteel also offer a Ruby product which is priced at $49 for a basic edition, or $199 for a professional version. Amethyst also comes in two editions so perhaps we will see something similar.

Adobe’s Duane Nickull has an illuminating post on how the Flash player handles REST. Nickull is responding to a post by Malcolm Box in which he complains how hard it is to use Flash with a REST web service. Box observes that Flash cannot send POST, PUT and DELETE requests when running in the browser, and does not send cookies.

He also notes that cookies are a poor way to manage state:

Cookies are for the browser and belong in the browser. Having Flash Player able to access cookies would be a mistake in my own opinion. Any logic that is facilitated by a browser should probably be dealt with at the browser layer before Flash Player is used.

Now, I think the comments on REST are important to read if you are engaged in designing a web service, as many of us in these days of cloud+device. There is a kind-of “word on the street” approach to web services which says that REST is good, SOA/SOAP is bad; but in reality it is not so simple, and these distinctions are muddled. REST is arguably a form of SOA, you can do SOAP with REST, and so on.

One factor is that reading data in a web client is far more common than writing data. It is easy to be an advocate of the simplicity of REST if all you are doing is GET.

The question Nickull asks is whether the transport protocol has any business dictating how the data it transports should be processed, for example whether it is an operation to retrieve or to write data:

In an SOA world, the transport functionality (usually implemented using SOAP) should focus on just delivering the message and it’s associated payload(s) to the destination(s), optionally enforcing rules of reliability and security rather than declaring to the application layer processing instructions to the service endpoint.

Read the post for more of the rationale behind this. Maybe, even if you are doing REST, restricting your web service to GET and POST is not such a bad idea after all.

That said, whatever you think about the architectural principles, you may find yourself having to write a browser-hosted Flash client for a service that requires an HTTP verb other than GET or POST. There are ways round it: see this discussion of Amazon S3 (which uses PUT) and Flash for an example.

I’m at an Adobe partner conference in Amsterdam – not for the partner sessions, but to be one of the judges for tomorrow’s application showcase. However, I’ve been chatting to Michael Chaize, a Flash Platform evangelist based in Paris, and picked up a few updates on the progress of Flash and AIR on mobile devices. AIR is a runtime which uses the Flash player for applications that are not hosted in the browser.

It’s well known that AIR for Android is ready to preview, though it is not quite public yet. Which platforms will come next? According to Chaize, AIR for Palm webOS is well advanced, though a little disrupted by the coming HP takeover, and Blackberry is also progressing fast. He added that Windows Phone 7 will not be long delayed, which intrigued me since that platform itself is not yet done. Although Microsoft and Adobe have said that Flash will not be in the initial release, Chaize says that it will come “within months” afterwards, where “months” implies less than a year – maybe six months or so.

We also talked about the constraints of a mobile platform and how that affects development. Currently developers will need to use the standard Flex components, but Chaize said that a forthcoming Flash Mobile Framework will be optimized for devices. Of course, the more you tailor your app for mobile, the less code you can share with your desktop version.

The Apple question also came up, as you would expect. Chaize pointed out that Adobe’s enterprise customers may still use the abandoned Flash Packager, which compiles Flash code to a native iPhone app, since internal apps do not need App Store approval. That said, I suspect that even internal developers have to agree the iPhone Developer Program License Agreement, with its notorious clause 3.3.1 that forbids use of an “intermediary translation or compatibility layer or tool”. Even if that is the case, I doubt that Apple would pursue the developers of private, custom applications.

Lots of Adobe news this week.

First, the release of Flash Builder 4. It seems a long time ago that I was looking at the first preview of code-name Gumbo; it’s good to see this finally released. Since it is Eclipse-based, it looks similar to to Flex Builder 3.0; but under the covers there is the new Flex 4 SDK with the Spark component architecture. The design tools have been revamped, and a time-saving feature is that you can now generate an event handler with one click. Flash Builder 4 also has built-in unit testing with FlexUnit, which is a big deal for those enlightened folk who do test-driven development. 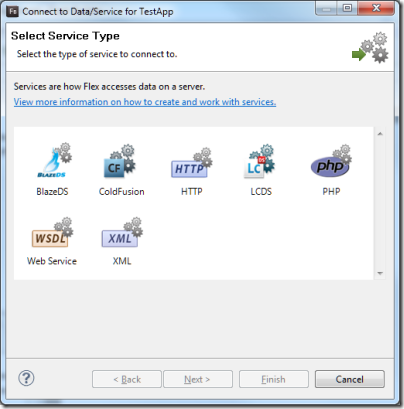 There is a new data/services panel that shows all the available sources, with drag-and-drop data binding, batch updates, and other handy features.

There are a few downsides to Flash Builder 4. ActionScript feels dated if you have been playing with something like C# 4.0, soon to be released as part of Microsoft’s Visual Studio 2010. I’ve also heard complaints that equivalent projects built with Flex are larger than equivalents built with the Flash IDE. The naming is puzzling; we now have to distinguish between the Flash IDE and the Flash Builder IDE, which are completely different products, but the SDK for code-centric development is still called Flex. There is no support yet for AIR 2.0, the latest version of the desktop runtime; nor for the much-hyped iPhone app development. Patience is called for, I guess.

The next big product launch from Adobe will be Creative Suite 5, for which a launch date of Monday, 12th April has been announced. You can sign up for an online launch event and see some sneak peek videos here.

Finally, Adobe released quarterly financial figures today. The company says they are strong results; revenue is 9.1% higher than last year and GAAP earnings are positive (unlike the last quarter). However, looking at the investor datasheet [PDF] I noticed that new analytics acquisition Omniture now accounts for 10% of revenue; if you deduct that from the increase it does not look so good. Still, a profit is a profit, and the quarter before a major update to CS 5.0 may be under par as users wait for the new release,  so overall it does not look too bad.  The Q1 Earnings Call is worth looking at if only for its nice indexing; I wish all online videos worked like this.

One questioner asked about HTML 5 – “how quickly can you provide support when it comes”? An intriguing question. I suspect it reflects more on the publicity around Flash vs HTML than on the progress of the HTML 5 standard itself, which is coming in fits and starts. “The reality is that it’s a fragmented standard, but we will continue to support it”, was the answer from CEO Shantanu Narayen, though he added a plug for the “benefits of our runtime, which is Flash”.