There are two sites at ITWriting.com and if you follow the RSS feed for this one you may have missed the posts at the other. This site covers software development and IT admin topics, while Gadget Writing covers mobile devices, audio, general software tips and reviews, and in general has a more consumer flavour.

Among the popular posts is the Desktop Windows 8 survival guide which is a guide to those awkward issues you will encounter when using Windows 8 on a traditional keyboard and mouse PC rather than a tablet. This has been considerably updated and expanded from its first version.

Gadget Writing has its own RSS feed which is here.

Here are some other recent posts:

This may be why your computer is crashing

I was asked to look at a PC which was misbehaving. Sometimes it worked, but increasingly it was freezing or crashing. Sometimes the hard drive would corrupt and needed Windows repair before it would boot. I took a look. I … Continue reading →

Based in Los Angeles, Audyssey specialises in audio processing software. This is used in home theatre equipment such as multi-channel receivers, and also finds its way into TVs, mobile devices and cars. In 2010 Audyssey started making its own audio … Continue reading →

Farewell to the Squeezebox

It looks as if Logitech has discontinued the Squeezebox, a range of devices for playing music streamed from the free Logitech Media Server. Logitech also runs a streaming service on the internet, Mysqueezebox.com, which supports internet radio, Spotify integration and … Continue reading →

The one thing missing from Windows 8 tablets announced so far: simplicity

This week at IFA in Berlin PC manufacturers have been showing off their shiny new Windows 8 tablets. Vendors are competing for who has the cleverest way of combining touch-screen, tablet, trackpad and keyboard into a single portable device. Here … Continue reading →

Ever worry about exposing confidential data by losing a USB Flash drive? Easy to do; but worry no more. A DataTraveler Locker+ secure drive is password protected, and after 10 failed attempts the data is wiped. Read our full review … Continue reading →

Early users have been running into trouble with Windows 8 Storage Spaces. The same technology is used in Server 2012. I posted about the issues here. Storage Spaces is a way of virtualising disk drives. You manage physical drives in … Continue reading →

Ever lost a USB Flash drive? Do you even know? There are so many around now that it would be easy to drop one and not to notice. Most of the time that does not matter; but what if there … Continue reading →

I am writing this review, or should I say dictating, in Nuance’s Dragon NaturallySpeaking 12, the latest version of what is in my experience the most accurate speech recognition system out there. Accuracy has got to the point where the … Continue reading →

It is amazing how well desktop PCs work even when choked by dust. This one was working fine: 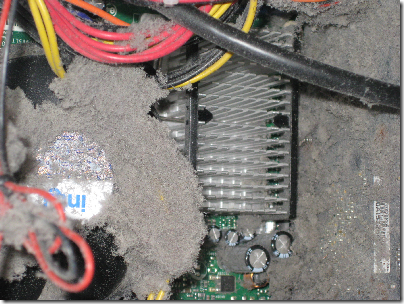 It is a little hard to see from the picture, but the mass of dust on the right is actually a graphics card. The graphics card has its own fan, which was so dust-choked that the the space between the blades was filled.

Running PCs in this state is not a good idea. If your machine is not working properly or overheating, it is worth a look. If it is working fine, perhaps it is a worth a look anyway. The best way to clear it is with one of those air duster aerosols.

Today I needed to swap motherboards between a machine running Hyper-V Server 2008 R2 and another running 32-bit Windows 7. No need to go into the reason in detail; it’s to do with some testing I’m doing of Hyper-V backup and restore. The boards were similar, both Intel, though one had a Pentium D processor installed and the other a Core Duo. Anyway, I did the deed and was intrigued to see whether Windows would start in its new hardware.

Hyper-V Server – which is really 64-bit Server Core 2008 R2 – started fine, installed some new drivers, requested a restart, and all was well.

Windows 7 on the other hand did not start. It rebooted itself and offered startup repair, which I accepted. It suggested I try a system restore, which I refused, on the grounds that the problem was not some new corruption, but that I had just changed the motherboard. Next, startup repair went into a lengthy checking procedure, at the end of which it reported failure with an unknown problem possibly related to a configuration change.

That was annoying. Then I remembered the problems Windows has with changing to and from AHCI, a BIOS configuration for Serial ATA. I posted on the subject in the context of Vista. I checked the BIOS, which was set to AHCI, changed it to IDE mode, and Windows started fine. Then I made the registry change for AHCI, shutdown, changed back to AHCI in the BIOS. Again, Windows started fine.

What puzzles me is why the long-running Windows 7 startup repair sequence does not check for this problem. If the alternative is a complete reinstall of Windows, it could save a lot of time and aggravation.

It is also worth noting that Windows 7 declared itself non-genuine after this operation, though actually it re-activated OK. I guess if you had two machines with OEM versions of Windows 7, for example, and swapped the motherboards, then strictly you would need two new licenses.