I am just back from Microsoft’s developer-focused Build event, where some special sessions were laid on for press, on the subject of “Modern journalism.”

The sessions appealed to me for one particular reason, which was the promise of automatic transcription. We were given a leaflet which says:

Tired of digging through hours of recordings to find that one quote? When you record a Teams interview, it’s saved to Microsoft Stream. Here you’ll get game-changing AI features: searchable transcript to jump to exact moments a key word or phrase was used.

Before the transcription thing though, we were taken on a tour of OneNote and Word with AI. The latest AI Editor in Word will tighten up your prose and find gaffes like non-inclusive language. There is lack of clarity over the privacy implications (these features work by uploading everything you type to Microsoft) but perhaps it is useful. I make plenty of typographical errors and would welcome help, though I remain sceptical about the extent to which AI can deliver this.

On to transcription though. Just hit record during a voice or video meeting in Teams, Microsoft’s Office 365 collaboration tool, and it gets automatically transcribed.

Unfortunately I do not use Teams for interviews, though it is possible to use it even for in-person interviews by having a meeting of one and recording it. I am wary though. I normally use an external recording device. Many years ago my device failed one day (I forget whether it was battery or something else) and I used my Tablet PC to record an interview with the game inventor Peter Molyneux. My expectations were not particularly high – I just wanted something good enough that I could transcribe it later. Unfortunately the recording was so poor that you can only make out about one word in ten. This, combined with my written notes and memory, was just about sufficient to write up my piece; but it was not an experiment I felt inclined to repeat – though recording quality has improved since that early disaster.

Still, automatic transcription would be an amazing time-saver. Further, I respect what can be achieved. Nuance Dragon Dictate can give superb results after a bit of training. What about Teams?

Today I put the idea to the test. I took a recorded interview from Build, made with a dedicated device, and uploaded it to Microsoft Stream. I tried uploading an audio file directly, but it would not accept it. I then created a “video” by importing my audio into a one-slide PowerPoint presentation and exporting it as a video. The quality is fine, easily intelligible. Stream chewed on it for maybe 30 minutes, and then my transcript was ready. The subject was the Azure Kubernetes Service. Here is a snippet of what Stream came up with: 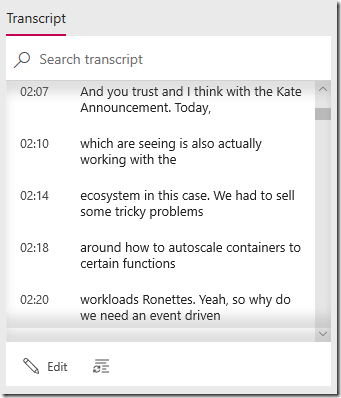 There is an unnecessary annoyance here, which is that you cannot easily select and copy the entire transcript. Notice that it is in short snippets. The best way to get the whole thing is to click the three dots under the video, choose Update Video Details, and then download the caption file. 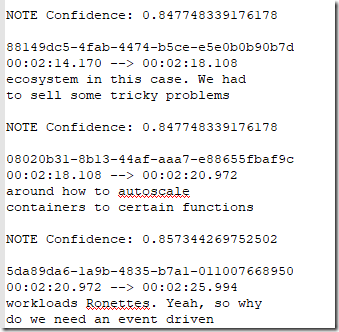 The format is, shall we say, sub-optimal for journalists, though it would not take too long to write a script that would extract the text.

The bigger problem is the actual transcription. The section I have chosen is wrong in an interesting way. Here is part of what was said:

With the KEDA announcement today, what you’re seeing is us working with the ecosystem, in this case Red Hat, to solve some tricky problems around how to autoscale containers.

and here is the transcription:

with
the Kate Announcement. Today, which are seeing is also
actually working with the ecosystem in this case. We had
to sell some tricky problems around how to autoscale containers

Many of the words are correct, but the meaning is scrambled. Red Hat has been transcribed as “we had” losing a critical part of the content.

It is not my intention to rubbish this technology. Automatic transcription is very challenging, especially with specialist content. It is not unreasonable for the system to transcribe KEDA as “Kate”: it is a brand new acronym (Kubernetes-based event-driven autoscaling).

Still, the question I ask myself is whether fixing up the auto transcription will save me any time versus the old-fashioned approach. I use a Word macro that plays back the interview with hot keys to pause and backtrack, editing as I go.

The answer is no. It will take me as long or longer to make sense of the automatic transcription, by comparing it to the original, than to type it from scratch.

This might not always be the case. Perhaps with a more AI-friendly subject the transcription will be good enough to save some time. It could also help to find where in the recording a particular quote appears. So it is not altogether useless.

Transcription is difficult, but there are some simpler matters which Microsoft could improve. Enabling upload of audio files rather than video, and providing a continuous transcript that can easily be copied, for example.

Having a team within Microsoft rooting for journalists strikes me as a good thing in that an internal team may have more influence over the products.

It may be more a matter of some bright spark thinking, hey if we get more journalists using Office 365 that will help to promote the product. A strategy which will be more successful if effort goes into making product fit better with the way journalists actually work.

The UK’s public broadcasting company the BBC is in the spotlight, thanks to a new strategy review and ensuing discussion. I have only just read it, because of other work, but I think it is significant. The BBC’s Director-General Mark Thompson says:

Clearly the BBC needs the space to evolve as audiences and technologies develop, but it must be far more explicit than it has been in the past about what it will not do. Its commercial activity should help fund and actively support the BBC’s public mission, and never distort or supplant that mission.
Where actual or potential market impact outweighs public value, the BBC should leave space clear for others. The BBC should not attempt to do everything. It must listen to legitimate concerns from commercial media players more carefully than it has in the past and act sooner to meet them. It needs the confidence and clarity to stop as well as to start doing things.

Why such negativity? The essence of the problem is that the BBC has been too successful for some. Commercial broadcasters and web sites have to compete with an organisation that is publically funded, and complain that it is unfair competition. The BBC demonstrates the effectiveness of the subscription model, especially when that subscription is all-but compulsory. In the UK, you have to pay the licence fee if you have equipment capable of receiving its TV broadcasts.

My main interest is in the BBC website. It is one I use constantly, and I do not think there is anything like it in the world. It offers comprehensive news, features and comment, on a site that is fast and resilient, and without the irritation of advertising. For example, if I want to know the latest state of play in financial markets, I head straight to the BBC’s Market Data page.

The absence of advertising has several benefits. First, it increases confidence in the neutrality of the site. Second, it improves performance – I’m aware that my own blog is slowed down by ad scripts, for example, and I’m not happy about it; but I’m also trying to make business sense out of running the site. Third, it improves usability in other ways, with less distraction and increased space for content. Note though that the BBC site does carry advertising when viewed from non-UK locations.

The BBC web site is an enormous success, the 44th most visited in the world according to Alexa, and the top news site (cnn.com is next at 61) unless you count Yahoo, which is something different to my mind.

So what do you do with a world leader? Cut it, apparently. The report talks about “focusing” the BBC web site by:

This is made more explicit later in the report:

There is an even more explicit section on BBC Online further down (pages 36-37) – the report seems to say the same thing several times with more detail on each iteration – but I won’t quote it all here. I will note that the sections identified for removal are not ones that matter to me, with the possible exception of local news:

Restricting local sites in England to news, sport, weather, travel and local knowledge (where ‘local knowledge’ means supporting BBC initiatives such as Coast and A History of the World in 100 Objects where there is local relevance, but not general feature content)

I do understand the problem here. Consider, for example, UK newspaper sites like the excellent guardian.co.uk – disclaimer – there are a few of my own contributions there. Such sites do not really make money, because they depend on synergy with print media that is in decline, not least because of advertisers turning to the web. There is a big debate in the media industry about whether to charge subscriptions for sites like these, as the New York Times has done, and will do again. However, the existence and quality of the BBC’s free site significantly impairs the prospects for subscriptions to UK newspaper sites.

This, I presume, is why the BBC intends to increase the number of external links; a small compensation for its unfair advantage.

Nevertheless, I think the BBC is mad to consider reducing its online investment. It is against the trend; the web is rising in importance, and traditional broadcasting decreasing. It is bad for the UK, for which the BBC is excellent PR and a genuine service to the world. It is bad for subscribers such as myself, enforced or not, who want the online service to get better, not worse.

Rather than cutting back on the BBC’s most strategic services, I’d favour looking again at the way the BBC is funded and what happens to the licence fee, which is an anomaly. I don’t see any reason in principle why it should not be shared with other organisations that are serving the public interest in news and media.