I’m at Mobile World Congress in Barcelona and meeting people new to me who say, “who do you write for”? I’ve been struck by several separate occasions when people say, after I mention The Register, “Oh yes, I loved that Apple article”.

The piece they mean (not one of mine), is this one by Kieren McCarthy. It recounts the Reg’s efforts to attend the iPhone 7 launch; or more precisely, efforts to get Apple PR to admit that the Reg is on a “don’t invite” list and would not be able to attend. 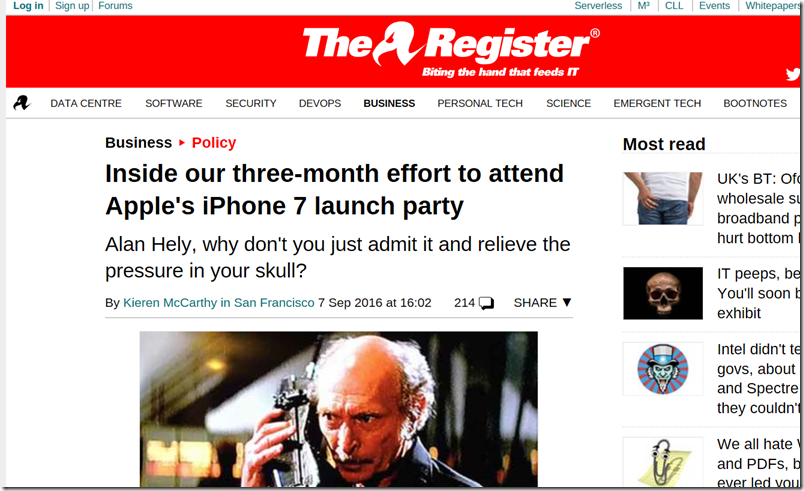 Why does everyone remember this piece? In short, because it is a breath of reality in a world of hype.

The piece also exposes hidden pressures that influence tech media. There are more people working in PR than in journalism, as I recall, and it is their job to attempt to manage media coverage in order to get it to reflect as closely as possible the messaging that that their customers, the tech companies, wish to put out.

Small tech companies and start-ups struggle to get any coverage and welcome almost any press interest. The giants though are in a more privileged position, none more so than Apple, for whom public interest in its news is intense. This means it can select who gets to attend its events and naturally chooses those it thinks will give the most on-message coverage.

I do not mean to imply that those favoured journalists are biased. I believe most people write what they really think. Still, consciously or unconsciously they know that if they drift too far from the vendor’s preferred account they might not get invited next time round, which is probably a bad career move.

Apple is in a class of its own, but you see similar pressures to a lesser extent with other big companies.

Another thing I’ve noticed over years of attending technology events is that the opportunities for open questioning of the most senior executives have diminished. They would rather have communication specialists answer the questions, and stay behind closed doors or give scripted presentations from a stage. 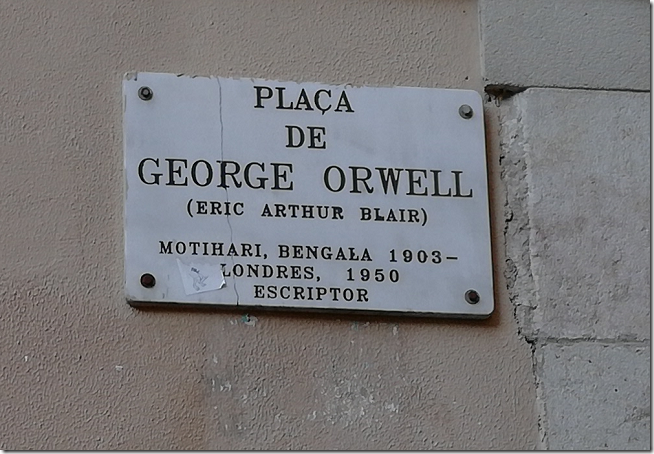 Orwell knew as well as anyone the power of the media, even though he almost certainly did not say what is now often attributed to him, “Journalism is printing what someone else does not want printed: everything else is public relations.”

Still, as I move into a series of carefully-crafted presentations it is a thought worth keeping in front of mind.

Finally, let me note that I have never worked full-time for The Register though I have written a fair amount there over the years (the headlines by the way are usually not written by me). The more scurrilous aspect of some Reg pieces is not really me, but I absolutely identify with The Register’s willingness to allow writers to say what they think without worrying about what the vendor will think.

The Guardian has an interview with Future Chief Executive Stevie Spring. Future is a major magazine publisher based in the UK. I was interested to hear how she believes the iPad could change the industry:

We’ve had a whole decade of people paying, believing that if they paid for the pipes they got the poetry free; [they think] ‘I’ve paid my £15 or £20 for broadband so I get access to a library of content’. The iPad gives us an opportunity to retrain them. Content production is not free and good content is worth paying for.

I am all in favour of more people paying for content. However, there are a couple of aspects of this line of argument which concern me. One is pure scepticism – how many print readers will actually be willing to transition to paying for online content just because the iPad is a convenient way to consume it? The problem is that while print has an unique appeal, once you are online it is easy to find equally good content for free, in the case of the consumer magazines in which Future tends to specialise.

The other concern is a deeper one. I get the sense that Spring is talking about content delivered as apps, since this is a proven business – people will more willingly pay for an app, apparently, than subscribe to a web site.

However, content delivered in an app is one step forward, two steps back. The step forward is possibly richer content, with the full power of the local machine. The steps back are that it is not part of the world wide web – not searchable or linkable.

Finally, there is the Apple problem. Is this a Future where we have to be Apple customers in order to enjoy its publications?

The UK’s public broadcasting company the BBC is in the spotlight, thanks to a new strategy review and ensuing discussion. I have only just read it, because of other work, but I think it is significant. The BBC’s Director-General Mark Thompson says:

Clearly the BBC needs the space to evolve as audiences and technologies develop, but it must be far more explicit than it has been in the past about what it will not do. Its commercial activity should help fund and actively support the BBC’s public mission, and never distort or supplant that mission.
Where actual or potential market impact outweighs public value, the BBC should leave space clear for others. The BBC should not attempt to do everything. It must listen to legitimate concerns from commercial media players more carefully than it has in the past and act sooner to meet them. It needs the confidence and clarity to stop as well as to start doing things.

Why such negativity? The essence of the problem is that the BBC has been too successful for some. Commercial broadcasters and web sites have to compete with an organisation that is publically funded, and complain that it is unfair competition. The BBC demonstrates the effectiveness of the subscription model, especially when that subscription is all-but compulsory. In the UK, you have to pay the licence fee if you have equipment capable of receiving its TV broadcasts.

My main interest is in the BBC website. It is one I use constantly, and I do not think there is anything like it in the world. It offers comprehensive news, features and comment, on a site that is fast and resilient, and without the irritation of advertising. For example, if I want to know the latest state of play in financial markets, I head straight to the BBC’s Market Data page.

The absence of advertising has several benefits. First, it increases confidence in the neutrality of the site. Second, it improves performance – I’m aware that my own blog is slowed down by ad scripts, for example, and I’m not happy about it; but I’m also trying to make business sense out of running the site. Third, it improves usability in other ways, with less distraction and increased space for content. Note though that the BBC site does carry advertising when viewed from non-UK locations.

The BBC web site is an enormous success, the 44th most visited in the world according to Alexa, and the top news site (cnn.com is next at 61) unless you count Yahoo, which is something different to my mind.

So what do you do with a world leader? Cut it, apparently. The report talks about “focusing” the BBC web site by:

This is made more explicit later in the report:

There is an even more explicit section on BBC Online further down (pages 36-37) – the report seems to say the same thing several times with more detail on each iteration – but I won’t quote it all here. I will note that the sections identified for removal are not ones that matter to me, with the possible exception of local news:

Restricting local sites in England to news, sport, weather, travel and local knowledge (where ‘local knowledge’ means supporting BBC initiatives such as Coast and A History of the World in 100 Objects where there is local relevance, but not general feature content)

I do understand the problem here. Consider, for example, UK newspaper sites like the excellent guardian.co.uk – disclaimer – there are a few of my own contributions there. Such sites do not really make money, because they depend on synergy with print media that is in decline, not least because of advertisers turning to the web. There is a big debate in the media industry about whether to charge subscriptions for sites like these, as the New York Times has done, and will do again. However, the existence and quality of the BBC’s free site significantly impairs the prospects for subscriptions to UK newspaper sites.

This, I presume, is why the BBC intends to increase the number of external links; a small compensation for its unfair advantage.

Nevertheless, I think the BBC is mad to consider reducing its online investment. It is against the trend; the web is rising in importance, and traditional broadcasting decreasing. It is bad for the UK, for which the BBC is excellent PR and a genuine service to the world. It is bad for subscribers such as myself, enforced or not, who want the online service to get better, not worse.

Rather than cutting back on the BBC’s most strategic services, I’d favour looking again at the way the BBC is funded and what happens to the licence fee, which is an anomaly. I don’t see any reason in principle why it should not be shared with other organisations that are serving the public interest in news and media.