So I arrive at a hotel and turn on wi-fi and connect. That little dialog comes up, Do you want to find PCs devices and content on this network? The correct answer in a hotel is No, but in my jet-lagged stupor I click Yes. Oops. 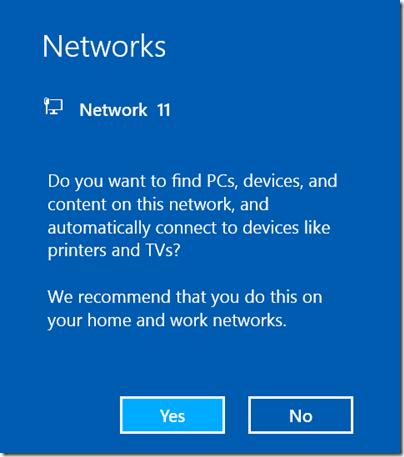 No problem, just change it, right? Hmm. Go to the Network and Sharing center and it is not obvious how to change the profile of a network. It tells me that the network is Private, but the setting seems to be read-only:

Not much of a Network and Sharing Center if you cannot change this setting; but never mind. How about just “forgetting” the network so that the dialog reappears?

I took a look here. Press and hold a network in the list to forget it. Unfortunately this does not work in Windows 8.1, and apparently that is by design.

OK, so try the command line:

The profile name in this context is the wi-fi SSID. Seems to work; but when I reconnect the profile dialog does not appear. Apparently the network is not fully “forgotten”.

There is a way. Regedit, and go to:

and find the GUID that matches your network, in my case Network 11.

Delete this profile. Do the command line thing as well to delete the profile. Now the network really is forgotten. Reconnect, the profile dialog comes up again, and now you can choose Public.

There must be an easier way though. Anyone know the user-friendly way to fix things when you accidentally select the wrong profile for a connection?

It seems that this is meant to be set in Charms – PC Settings – Network. In fact, you can do it for wired connections. Here is what I get if I tap a wired connection, which I presume changes the profile: 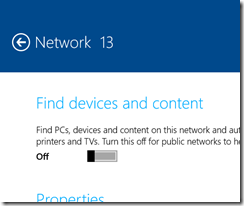 However, if I tap a wireless connection I get this: 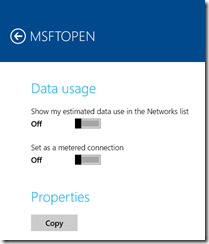 This looks like a bug to me, either with my 8.1 install or more generally.

At Microsoft’s Build developer conference in San Francisco the company is showing off new features of Windows 8.1, now in preview, a major update to Windows 8.0.

In a session on the Windows Runtime, the platform behind the tablet platform in Windows 8, there was a dramatic moment when a huge black ball rumbled onto the stage and threatened to destroy the “Lemonade stand” which the presenters were using to showcase how a very small business might use Windows 8.

The significance of the ball (a custom Sphero) is that Windows 8.1 has Bluetooth APIs built in, so that app developers can easily control a Bluetooth device from code.

Robotics is an obvious application, but with increasing numbers of Bluetooth devices out there, this is a smart move by Microsoft. 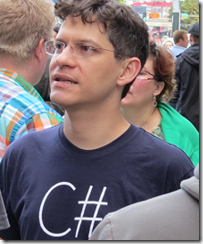 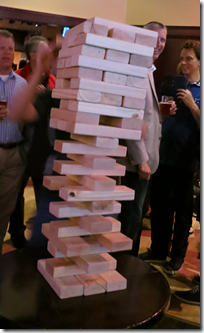 Microsoft is now talking in detail about Windows 8.1, essentially a service pack for the original release.

So what’s new? My quick summary, with importance rating from 1-10:

You can make your lock screen a slide show (1)

You can set new animated backgrounds for the Start screen (1)

Start button always visible on the desktop. (6) since many struggle with this.

You can choose your desktop background as your Start screen background. This gets a (4) since it reduces the dissonance between desktop and Metro a fraction.

The Start screen view is now a “favourites” view. Apps do not add themselves by default (I am not sure if this applies to desktop as well as Store apps, but I hope it does). The All Apps view by contrast has everything. And you can set Apps view as the default if you want. All good changes. (5).

Easier grouping and rearranging of tiles. Rated (5) since this important feature is hard to find in Windows 8.0.

New combined web and local search in the Search bar:

In Windows 8.1, the Search charm will provide global search results powered by Bing in a rich, simple-to-read, aggregated view of many content sources (the web, apps, files, SkyDrive, actions you can take) to provide the best “answer” for your query.

I like the idea but I’m not optimistic about how useful it will be. Hedging bets with (5).

Improved built-in apps. Detail not given. Rated (6) as this is badly needed but the extent of the improvements are unknown.

Variable and continuous sizing of snapped views and support for multi-tasking Store apps across snapped views, multiple displays, and multiple windows of the same app. Fascinating. Handy improvements, but is Metro now re-inventing the desktop but with non-overlapping Windows as in some early windowing systems? What challenges are posed for developers who now have to deal with resizable apps almost as on the desktop? (7).

Improved Windows Store with related apps, automatic background update, on-screen search (no need for Charms). (5) but what we really need is better apps.

SkyDrive app supports offline files and “Save to SkyDrive”. (5) but the desktop one already supports this.

The updated PC Settings in Windows 8.1 gives you access to all your settings on your device without having to go to the Control Panel on the desktop.

Internet Explorer 11, the “only browser built for touch.” (5) as features unknown.

Hmm, I have got to the bottom of the list and rated nothing higher than 7/10 Then again, I have not had hands-on experience yet. If Windows 8.1 fixes my annoying Samsung Slate unresponsive screen, that will be (9) of course.

The total update may be more satisfying than the sum of its parts. For my general take though on why this will not “fix” Windows 8 see here.