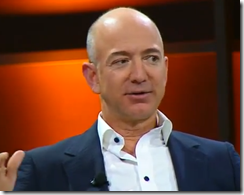 If there was a common theme, it was his belief in the merit of low margins, which of necessity keep a business efficient. Low margins are also disruptive to other businesses with high margins. But how low can margins go? In some cases, almost to nothing. Talking of Kindle Fire, Bezos remarked that “We don’t get paid when you buy the device. We get paid when you use the device.” It is the same pay as you go model as Amazon Web Services, he said, trying to remain vaguely on topic since this was an AWS event.

His point is that Amazon makes money when you buy goods or services via the device, not from profit on the device itself. He adds that this makes him comfortable, since at that point the device is also proving its value to the customer.

Google has the same business model with its Nexus range, which is why Google Nexus 7 and Amazon Kindle Fire are currently the best value 7” tablets out there. For Google, there is another spin on this: it makes the OS freely available to OEMs so that they also push Google’s adware OS out to the market. If you are not making much profit on the hardware, it makes no difference whether you or someone else sells it.

We do not have to believe that either Amazon or Google really makes nothing at all on the Kindle Fire or Nexus 7. Perhaps they make a slim margin. The point though: this is not primarily a profit centre.

This is disruptive because other vendors such as Apple, Microsoft, Nokia or RIM are trying to make money on hardware. So too are the Android OEMs, who have to be exceptionally smart and agile to avoid simply pushing out hardware at thin margins from which Google makes all the real money.

Google can lose too, when vendors like Amazon take Android and strip out the Google sales channels leaving only their own. This is difficult to pull off if you are not Amazon though, since it relies on having a viable alternative ecosystem in place.

But where does this leave Apple and Microsoft? Apple has its own services to sell, but it is primarily a high margin hardware company selling on quality of design and service. Apple is under pressure now; but Microsoft is hardest hit, since its OEMs have to pay the Windows tax and then sell hardware into the market alongside Android.

Ah, but Android is not a full OS like Windows or OSX. Maybe not … yet … but do not be deceived. Three things will blur this distinction to nothing:

1. The tablet OS category (including iOS) will become more powerful and the capability of apps will increase

2. An increasing proportion of your work will be done online and web applications are also fast improving

3. More people will question whether they need a “full OS” with all that implies in terms of maintenance hassles

Microsoft at least has seen this coming. It is embracing services, from Office 365 to Xbox Music, and selling its own tablet OS and tablet hardware. That is an uphill struggle though, as the mixed reaction to Windows 8 and Surface demonstrates.

Most of the above, I hasten to add, is not from Bezos but is my own comment. Watch the fireside chat yourself below.